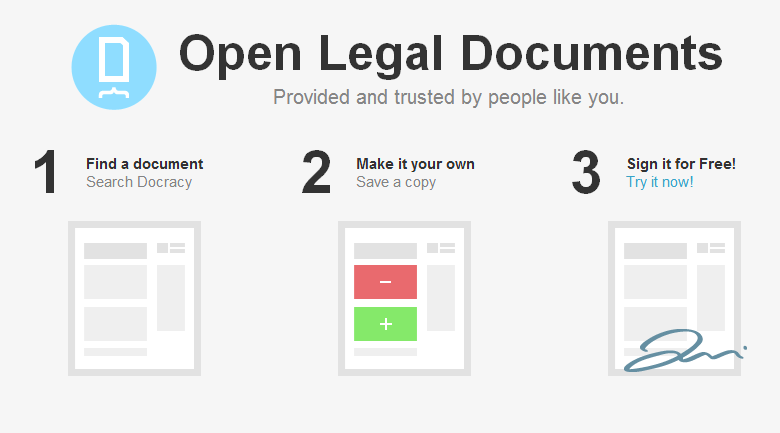 Democracy for all legal documents – set them free!

After winning a hackathon with their prototype over a year ago, Docracy has come a long way, entering beta after earning a seed round of venture funding amounting to $650,000. The startup reminds us of a legal version of Napster for legal documents where users can share and use legal documents for business, real estate, wills, and other basic uses, and all downloads, shares, and even electronic signatures are free.

The New York startup is backed by Quotidian Ventures who also invested in Nestio.com, and First Round Capital who invested in HotelTonight and Wanelo. The team remains small, but the impact remains large.

Users can search the database of legal documents that have been uploaded by other users, they can be reviewed without having to enter some secret walled garden before looking at it, and a copy can be saved to a user’s account. How this differs from many other document sharing sites is that it is not simply a repository of content, rather, each document uploaded features the user who uploaded the document, giving transparency and accountability to the content. To further the cause of transparency, if users see errors on documents, they can create their own public edits to improve the documents.

Docracy says, “We believe that parties that come to an agreement should not be forced to spend hundreds, or thousands of dollars to make it enforceable. Our goal is to create a library of industry standard documents which will help you save on legal fees and transaction costs, hosted by a reliable third source.”

The service is not without challenge. While some documents are fairly standard, like the Power of Attorney options, or Non-Disclosure forms, others remain highly nuanced, like real estate, which in many cases, the contracts are not legal to share, as each form used by a Realtor typically has a unique ID number, like leases and purchase contracts. Landlords can, however, benefit from reviewing leases used by other independent non-licensed landlords.

Without saying it, the company looks like it could shake up Legal Zoom and put a dent in the legal document arena, even with the challenge of monitoring licensed content that is not legal to share. Startups and small businesses often just need a simple document to review, like a consulting contract, to know if they’re on the right path or not. Docracy makes that a reality, and they do it all for free.