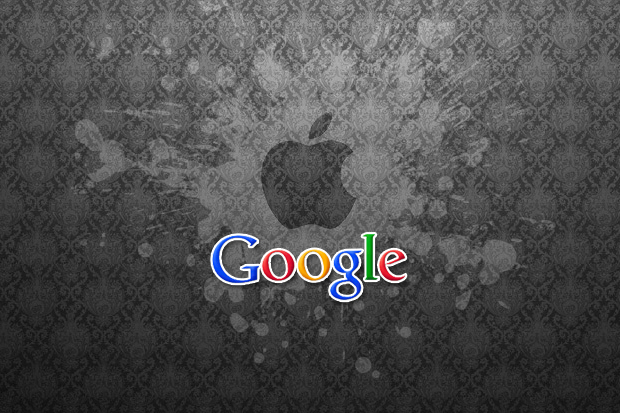 In the last ten years, Apple co-founder Steve Jobs received 347 patents – and yes, many of those came after his death.
Google co-founders Larry Page and Sergey Brin have only 27, combined, from the past decade. Sooo Apple is smarter than Google? Not quite.

Periscopic, a data visualization studio based in Portland, has created a custom series of graphics for Fast Company that compare the so-called “innovation signatures” of Apple and Google, using ten years of patent data. 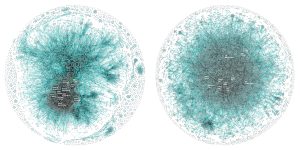 The graphic on the left represents Apple, and Google’s on the right.

Each dot represents a patent inventor; the larger the dot, the more patents they have filed under their name.

As you can see, Google’s patent pattern is fairly uniform, with few big-name patent magnets, while Apple features a concentrated center of apparent innovation machines.

There’s a narrative here, and it reveals a ton about the driving forces behind these two very different organizations.

Wes Bernegger, a “data explorer” at Periscopic, says that in the last decade, Apple has been granted 10,975 patents dispersed amongst 5,232 inventors, while Google has earned 12,386 patents with a team of 8,888.
That leaves the average inventor at Google with over 50 percent fewer patents than an inventor at Apple.

What could that mean?

Check out the visualization. “The most notable difference we see is the presence of the group of highly connected, experienced ‘super inventors’ at the core of Apple compared to the more evenly dispersed innovation structure in Google,” continues Bernegger.

“This seems to indicate a top-down, more centrally controlled system in Apple vs. potentially more independence and empowerment in Google.”

A closer look at Apple’s blob of patents reveals a sort of inner-circle, compared to Google’s more even spread.

And the revelation in the data makes sense: Apple is notorious for its top-secret design lab, and it produces a small number of highly profitable products.

Google, by contrast, is made up of many small teams full of individuals with the power to create and innovate. (Google even tried to eliminate management entirely about 15 years ago, though they’ve since reinstalled the idea.)

“The average number of inventors listed on a patent at Apple is 4.2. At Google, it’s 2.8,” says Bernegger. “These combined effects mean an inventor at Apple has, on average, produced more than twice the patents than one at Google. Nine vs. four.”

And there’s at least one thing the two organizations have in common.

Their visualizations both reveal a sort of membranous ring around each arrangement. These relatively isolated dots represent innovators working basically alone.

So what are isolated dots doing there?

At Google, many of those outliers could represent the 269 patents related to cameras and printers sold to Google by Kia Silverbrook in 2013.

And in general, the peripheral inventions could be one-offs from employees, or classified contributions from shell companies.

Shell companies, for example, could be people who work outside the main organizational team.

Both are highly successful companies, but which strategy is more sustainable? Which is cooler? It’s hard to say – let us know which side you’re on in the comments!

In this article:apple, google, patents, The News