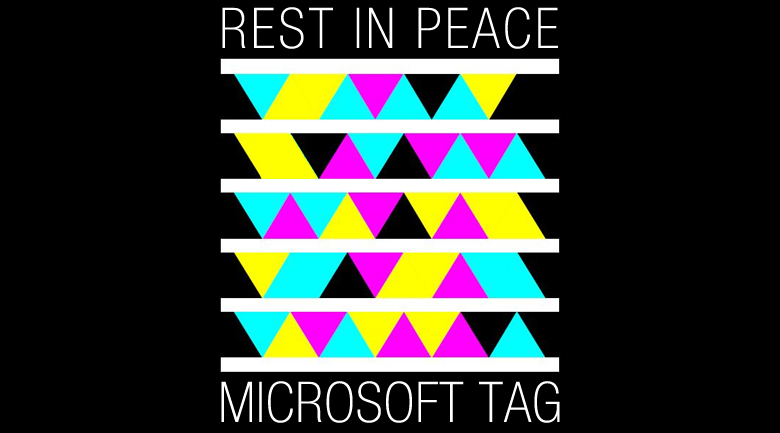 Microsoft Tags to shut down

Four years ago, on the heels of the rising popularity of QR codes, particularly in Asia, Microsoft launched their own version called Microsoft Tag, as pictured above. You may have thought it was a hipster album cover, but no, it was Microsoft’s proprietary code system which also required the Microsoft Tag reader, therefore, a standard QR code reader could not read the code.

Aside from requiring consumers to download yet another app to do yet another thing, we have long argued that QR codes were a fad, and Microsoft has made a smart move by announcing they will shutter the service, affirming our assertion that QR codes are a temporary fix.

Read also: Could QR codes be just a passing trend in technology?

Although many people had no idea that Microsoft had their own QR code equivalent, several food brands and the like have the multi-colored codes printed on their products, which is likely why the company has given a two year heads up that the technology will be shuttered. Although Microsoft Tag is getting the axe, the company will move forward with QR code company ScanLife to help companies using the codes in their campaigns to transition, with prices ranging from $0 to $69 per month.

Sitting at a Starbucks four years ago, we discussed Microsoft Tag with a tech startup guy here in Austin who was insistent that his entire model be focused on the technology, with the theory implanted deep in his brain that a legacy brand is more likely to stick around than the fly-by-night QR code startups popping up all over.

Of course we disagreed, not only that a legacy brand would insure longevity, but that QR codes were not the way to go. In fact, we’ve written several pieces critiquing the technology, as in most cases, it is just a gimmick that would be better served by a highly memorable URL people could later type in rather than requiring someone in a hurry to download a mystery app from the app store, open it, scan a code, and hope their time was worth it (it wasn’t).

Additionally, we have long questioned the security of QR codes, as there was never any security system set up to insure that the mystery site a person is visiting isn’t actually a virus.

I predict that in five years, QR codes will be rare in the United States and Microsoft Tag shutting down is the beginning of the end for the technology. While it originally offered a trackable measure of how effective various campaigns are, consumers simply never caught on for the aforementioned reasons.

The caveat, however, is that although augmented reality is an amazing technology, it won’t be the replacement in this decade, and there are industries that will likely continue to flock to QR codes which will mean it ultimately ends up being a very niche-oriented technology. Conferences and music festivals will likely continue using the technology, but it’s day for marketers died before it got started. Good move, Microsoft.