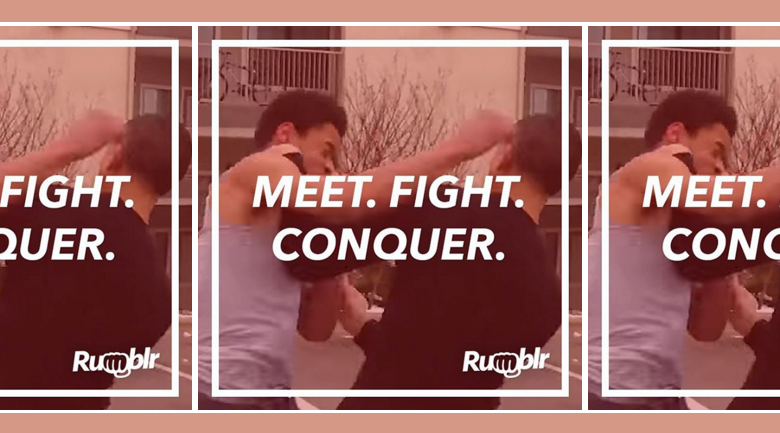 Perfect timing for a world that currently can’t stop talking about the Ronda Rousey takedown. For several days last week, the internet was obsessed with the idea of Rumblr, an app that could easily be described as Tindr meets Fight Club. The app described itself as the only online place “for recreational fighters to find, meet and fight other brawl enthusiasts nearby.”

The online media was thrilled with the idea for 72 hours, even interviewing police officers about the future fallout of software that wasn’t even ready for public consumption.

Then the world discovered the app was a ruse.

How did this happen, you guys!?

There were signs all along, but we chose to ignore them. There was a mock-up of the app that included the word “Verizon” in all caps, a fake phone number on Rumblr’s WhoIs domain database, and no standard Terms of Service that are included on all apps nowadays. In addition, there was a screenshot of a fake Rumblr Instagram account, a huge red flag in a time where Instagram rules the world.

So who are the clever folks behind this hoax? Von Hughes is a creative consulting agency that decided to develop a fake app and grow a fake brand by getting it picked up in tech news sources, and then quickly, global news outlets.

It took off across the wires

On Friday, Nov. 6, VentureBeat was the first to write about Rumblr, saying, “No sign of any monetization efforts on the site, just an effort to build a large community of punchers.” They even added, “You know, Rumblr might be a good site for advertisements from emergency rooms, anger management therapists, or first-aid supplies.”

Next to pick up the story of the fake Fight Club? Vice Sports, U.K.’s Independent, and even The New York Daily News. Only Gizmodo and The Washington Post seemed doubtful that Rumblr could be legitimate. Adam Clark Estes of Gizmodo even said, “This whole set up screams viral marketing campaign.” Estes turned out to be spot on.

And now we all know von Hughes but are bummed

Just 72 hours after Rumblr turned up on the scene, von Hughes came forward announcing Rumblr had been a project, a way to launch their creative firm. Three days of internet frenzy has brought von Hughes to the forefront of everyone’s minds and has certainly shown how much publicity the consulting agency will be able to garner its future clients.