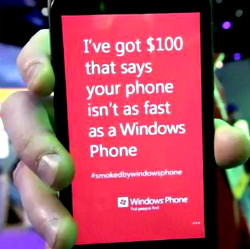 On the floor of the 2012 Consumer Electronics Show in Las Vegas, Microsoft Windows Phone Evangelist, Ben Rudolph was on a mission to put the Windows Phone head to head against any other phone attendees had in their pockets.

If an attendee could perform an agreed upon task faster than Rudolph on a Windows Phone, they were handed a fresh $100 bill, but if they lost, they had to look into the camera and profess that they were “smoked by Windows Phone,” which viewing several videos appeared to be quite difficult for losers to do.

According to TheVerge.com, Microsoft had 30 wins, 3 losses, and 1 draw. The campaign so far has cost them $300 which is not bad for a hashtag (#smokedbywindowsphone) that spent some time trending on Twitter.

Below is a loss (which is quite uncomfortable to watch) and one of the few wins. Tell us in the comments what you think of the campaign and if you think you could beat a Windows Phone.

In this article:CES, Technology, windows phone