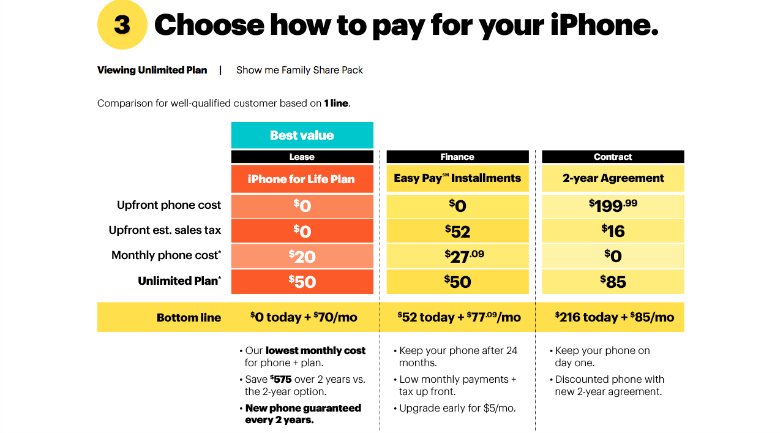 This fall, seven-year Sprint CEO Dan Hesse was replaced by Brightstar Founder, Marcelo Claure who spent his first day on the job with Apple CEO, Tim Cook. Quite telling.

It has been known for some time that Sprint would launch a program aimed at retaining current Sprint customers and attract Apple fans that have long been loyal to AT&T. Today, the company announces the launch of the “iPhone for Life” plan which allows users to get a new iPhone with no upfront cost, with an unlimited data plan for $50 with a $20 fee due each month to lease the equipment.

What does the fee include?

The fee includes the 16GB iPhone 6, with the iPhone 6 Plus running $25 monthly, and prices vary based on storage capacities.

It is an equipment lease, however, and customers don’t actually own the device, but Sprint guarantees access to a new device every two years. If someone wants to keep their device, they can opt to pay Sprint for the phone’s remaining unpaid value as determined when they sign up for the two year term.

It is a limited time offer for existing subscribers, just as the ridiculous “Framily” plan was only available for a specific period. It can be changed by users opting in to a new plan so long as they’re willing to sign for another two years.

Why such a dramatic plan?

Customers have until January 15th to sign up, and available to customers who currently have service through one of four plans: Unlimited My Way, My All-in, Simply Everything and Everything Data (share) rate plans.

With the Sprint Framily plan, they took a first shot at getting customers to lease equipment rather than own, and it appears they’re revamping the lease-to-own or lease-until-upgrade model.

In today’s world, winning new customers no longer means first time account holders to a carrier, it means stealing them from a competitor. Sprint and AT&T are going head to head these days, and with the new CEO, Sprint is likely feeling more confident about their ability to get ahead, as sacrificing a few dollars means attracting more users.