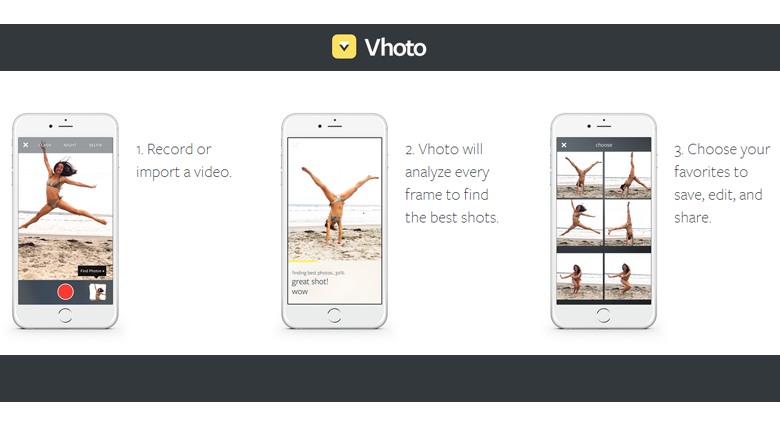 Marrying the best of photo and video

It is often better to capture life’s biggest moments on film rather than on still photograph. With Vhoto, you are able to have the best of both worlds. This app is designed to take video footage and provide crisp still photos so that you do not have to keep switching back and forth between video and picture settings.

The use for the app, which is named after a combination of video and photo, is explained by the Vhoto website as, “record everything and we’ll find the best photos from your video.” The website also offers a three-step explanation for the app’s use. First, you record or import a video to your photo.

Second, Vhoto will analyze each frame from the video to find and create the best stills. Lastly, you choose your favorite photos from their selection and save them to your phone to share with friends.

Creator Noah Heller developed the idea after being struck with the question about what happens to the amount of photos and videos we accumulate and how much of it is worth saving and sharing. Vhoto uses a computer vision technology to evaluate video footage to pull the stills that would make the best photographs.

Heller sells the idea of his app by stating that great moments in life should be video recorded rather than photographed, leaving his app to allow you to enjoy both.

How the technology works

Vhoto examines video footage in the search of particular qualities, including: sharpness, clarity, color, and the presence or absence of an individual’s face or expression. However the app is also smartly designed to examine novelty, context, and composition. This is beneficial for someone who may enjoy photos with these features but may not be the best at achieving them.

The app also takes into account preferences stemming from past usage and tries to pinpoint exactly what kind of photo the user enjoys most. The photos that you end up saving or sharing will be analyzed so Vhoto can help to produce the same results in the future. The app is available for free in the iTunes store but is not currently available in the Android Market.