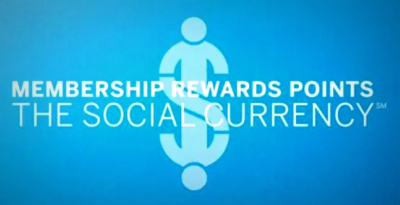 Amex is serious about social media

You’ve seen the video above on television and rewards points are an old concept for credit card companies, but American Express has spent the past few years highly focused on social networking. They’ve been a strong voice in the space with their campaigns and have focused on bringing in people believed to be thought leaders like Guy Kawasaki to participate in and promote their “OPEN forum.”

They have been promoting the concept of “social currency” for a long time which they are now supporting with offering deals to their card owners who sync their cards to Foursquare and have now gone one step further and are offering customers to use those rewards mentioned in the video above and use them to pay for Facebook ads. For every $6,750 spent on a business card, $50 of Facebook advertising is redeemable in the Membership Rewards program.

Because Facebook accounts for one in three display ads online in the U.S., the ability to use rewards points for Facebook ads is timely and useful for any small business. We have told you how Facebook ads are a marketer’s dream and we reiterate today that the ability to spend a few dollars and put your offering in front of an extremely filtered targeted demographic is priceless (which would make it better if MasterCard had jumped in on offering Facebook ads as rewards, no?).

“The Membership Rewards program is a unique and core asset for American Express that is becoming even more relevant for our Cardmembers in the social media space,” said Ed Gilligan, Vice Chairman at American Express. “We are thrilled to partner with Facebook to bring this first-of-its kind opportunity to small business Cardmembers who can now leverage the marketing power of the world’s largest social media platform in a smart and effective way.”

“With hundreds of thousands of small businesses advertising on Facebook, this latest effort by American Express effectively takes advantage of our platform by providing these business owners with a new and convenient way to pay for Facebook advertising,” said David Fischer, vice president of advertising and global operations, Facebook.

If you’re already an Amex user, this could be a much more effective use of points than shoe shopping. If you’re not an Amex user, does having increasing social options connected to your card motivate you to switch?

AGBeat is not affiliated with American Express.