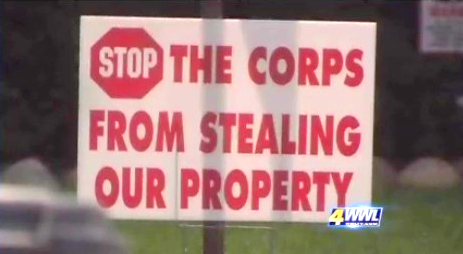 One visit to New Orleans and you know that the city once destroyed by the historic Hurricane Katrina is disparately different from street to street. Some parts of the city are immaculate, clean and rebuilt, while blocks away are buildings boarded up and abandoned with broken windows and spray paint on the front door marking officials’ communication with each other.

Some homeowners have long ago rebuilt and recovered, while others are fighting a new battle with the Army Corps of Engineers who has gone on a “land grab” according to one homeowner. According to state law amended in the last legislative session, nothing can be built within 15 feet from the bottom of a levy and in Orleans and Jefferson Parish, there are major fines associated with any structures in that zone.

Not confiscating, not compensating

The Corps is clearing out fences, sheds, playscapes, and anything that they say prohibits their access of the land. They are not confiscating the land or calling for use of it, rather proclaiming homeowners may not have any structure in that zone, even if it is rightfully their land. Homeowners have sued and are frustrated as they feel others have been able to recover and move on, but they are stuck in a legal battle over what they legally can and cannot do on their own property which the government has not bought from them or offered compensation on.

In a 30 page opinion, a federal judge ruled that he would not throw out the case as the Corps had petitioned for. More legal battles lie ahead, but mostly, some homeowners simply feel that they aren’t allowed to move on from Katrina until they have their full property and rights back.