There are many professionals that attend networking functions out there. Some people attend events for leads, some to get familiar with what kind of events are going on around town, and others attend to connect with their peers and other professionals for business or partnership reasons.

Minding these tips will allow you to network better, and you’ll quickly become more popular with your peers.

1. Whip out the compliments

Compliment other attendants at events – usually when you are attending a networking event, there is some kind of line for nametags. There are other professionals waiting in line to pay or to get their nametags. When you greet someone and make them feel good publicly, other professionals in line see you. Doing that helps you to project your warmth, inviting nature, and most of the time, it gets you into a professional conversation right away before you even enter the event.

Sometimes there are people that arrive at networking functions in a suit (that’s good ); however, sometimes those same people are seen reaching out to every person in the room without creating any meaningful conversation. The more people that attend events and do this sort of behavior, the more a group sours quickly.

The best way to network is be yourself, be genuine, thoughtful, helpful, and strategic in thought. You’ll notice that you will build your network a lot quicker when you talk to people, understand their challenges, and give them enough time to feel like they are connecting to you.

The people that like you because you’re willing to stay and chat for a bit are more likely to contribute resources, offer opportunities they see for you than if you got into quick meaningless conversations.

3. Secrets to approaching a host

So there is a right and a wrong way to say hi to hosts of the event. I know from hosting events myself, that saying hi lets a host know you appreciate their hard work for putting on the event. When people see you with the host, it does appear to elevate your perceived value to other on-lookers.

One issue I see all the time is that people say hello to the hosts when they are in deeper conversation with a high ranking professional such as a City Councilman or Business Partner. Interjecting to say hi during these times can be considered rude and sometimes can even put extra stress on the host because of the unexpected interruption.

When you say hello to the host, the best etiquette would be to either stand close by and wait for a pause in the conversation before you introduce yourself, or pick a spot in the group that is further away from the host and would be less of a distraction if you entered the group from that position. If you notice there is one person talking and everyone is listening intently, you should do the same, then say hi at the next opportunity when you have a better understanding of the situation.

Being mindful of the space you’re speaking into will make your host appreciate that you took the time to introduce yourself at an opportune time. Hosts that are pleased with the way you conduct business are more likely to introduce you to people. Hosts are probably the best people to introduce you to exactly who you should be talking to at that event.

You should also keep in mind that hosts tend to not like getting stopped when they are on their way out of a conversation as well. If you see a host leave a circle of people and make a direct line somewhere, that usually isn’t the best time to stop them. Chances are they are either responding to an emergency or they are headed for the bathroom. As a general rule, don’t corner the hosts, but wait your turn and then speak to them or have a mutual friend introduce you.

4. Build your network and give value

One of the best ways to really build a powerful network is by being friendly and helping people, and by giving them value. Value has many forms such as time, expertise/advice, money, entertainment (even telling a joke is valuable).

In each conversation, you gain practice looking for or finding out the reason the person is there at the event in the first place, then contributing in some way to help them achieve their goal or objective. If you can get them closer to their dreams, or even just tell a heartwarming or entertaining story, doing those things will make it more likely that people will introduce you to their friends and make it more likely they will engage you in conversation when you see them for a second time at another event. Over time, those people who remember you will introduce you to their friends which will make your future networking at events go much faster. 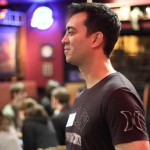