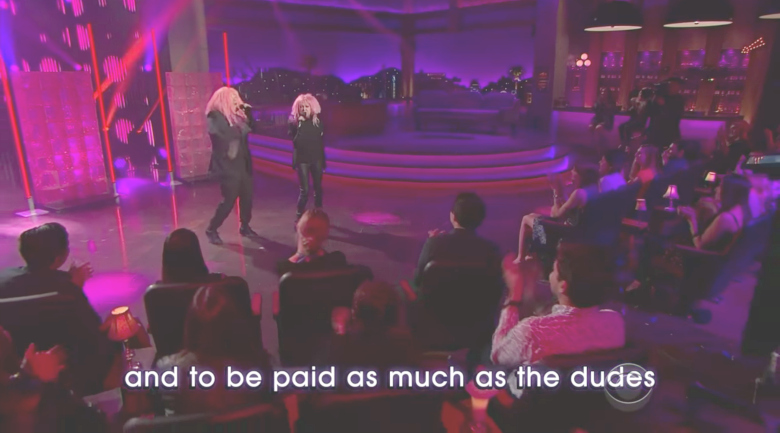 James Corden has made a name for himself recently as the go-to person for celebrities looking for a singing partner. His “Carpool Karaoke” has featured famous faces such as: Gwen Stefani, Justin Bieber, and Jennifer Lopez.

Read also: Is the gender pay gap smaller than is being reported? #UnevenProgress

This segment is part of “The Late Late Show with James Corden,” which also features many well-known names. The most recent one to make waves was guest Cyndi Lauper.

Famous for a plethora of hits and a vivacious fashion sense, Lauper appeared on the show performing her long-time hit “Girls Just Want to Have Fun.” However, with the help of Corden, there was a twist put on this pop favorite.

Lauper is stepping out as one of the many celebrities fighting for wage equality between men and women. By changing her song to “Girls Just Want Equal Funds,” Lauper pointed out the well-known but unaddressed issues with the wage gap.

Let’s continue to point out the obvious

“I come home, in the morning light. My mother says, “Why don’t you make the same as a guy?”” are the songs opening lyrics. The song continues on to point out that a woman’s workplace angst is not related to her menstrual cycle, but to the fact that she is doing the same job as a man while making less.

One of the highlights of the parody was touching on the fact that women will begin to pay for dates when they are paid the same as men. The song is catchy and relevant, but will it do anything to change the minds of those in charge?

Will it create change?

If I were a betting woman (which I’m not because I don’t make as much as a betting man), I would guess that this will not have the power to make great change. However, that does not mean it won’t aid in keeping the ball rolling in the journey to change.

This reminded me of when Patricia Arquette won Best Supporting Actress at the 2015 Academy Awards and used her speech as a means to point out the unfairness of the wage gap. This really got people talking, but ultimately didn’t do much.

The song will most likely make waves on social media throughout the next few weeks and then will turn into something of a memory. At the very least, it should serve as a reminder of the fact that there is still a long road ahead in the fight for equality.  (At the very very least, the tune makes for a great theme song for the fight).