After November’s historic low, the National Federation of Independent Business’ (NFIB’s) Small Business Optimism Index inched up 0.5 in December, but marks the second lowest level since March 2010. The NFIB says the poor results for December are due to “the deterioration of labor market components, and the surprising percentage of owners who still expect business conditions to worsen in the next six months.”

“Congress played chicken right up to the end of the year, leaving small-business owners with no new information about the economy’s future—no sense of how much their taxes would increase or if the economy would go over the now infamous ‘cliff,’” said NFIB chief economist Bill Dunkelberg. “The eleventh hour ‘deal’ has brought marginal certainty about tax rates and extenders and will provide some relief to owners, but it certainly doesn’t guarantee a more positive forecast for the economy. The January survey results will be far more enlightening about how the sector views the deal—higher taxes and minimal spending cuts may not be a panacea. And let’s not forget what is looming on the horizon: a debate over the debt limit and a regulatory avalanche of historic proportions about to spill out into the country.” 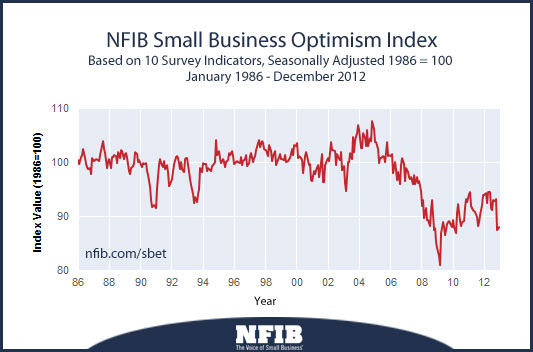 The Index is at a recession level reading as pessimism prevails, as 70.0 percent of owners surveyed characterized the current period as a bad time to expand, one in four of which cite political uncertainty as the top reason. Fully 23.0 percent of small business owners rank taxes as the top business problem, with 21.0 percent citing regulations, followed by 19.0 percent noting “poor sales” as the biggest problem.

“Job creation in December was essentially zero,” the NFIB notes, “although it improved infinitesimally from the November report. The average change in employment per firm increased to 0.03, up from -0.04 workers, with 11 percent of surveyed owners (up 1 point) reporting they added an average of 2.9 workers per firm over the past few months, and 13 percent reducing employment (up 1 points) an average of 1.9 workers (seasonally adjusted). The remaining 76 percent of owners made no net change in employment.”

Employment is set to increase at 7.0 percent of companies surveyed, while 11.0 percent plan reductions. Fully 33.0 percent of owners say there were few or no qualified applicants for open positions, with 16 percent of business owners citing they had “hard-to-fill” job openings.

Interest in new credit lines was minimal, and 71.0 percent report that not all of their credit needs are met. Meanwhile, more than half explicitly said they did not want a loan. More owners expect that it will be more difficult to arrange financing in the coming months. Capital expenditures remained in “maintenance mode,” the NFIB reports, as plans to make capital outlays remained at recession levels, marking historic lows.

Continue reading for the full report and video on the topic:

In this article:NFIB, small business optimism