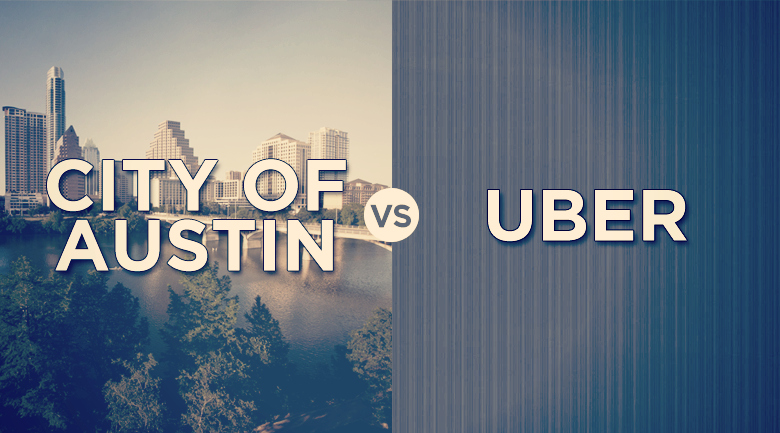 I want your service but I don’t want you, Uber and Lyft. Just like you want my business but you don’t care about me.

So here we are, at a crossroads.

What do you do when you discover that one of your favorite artists, someone that you idolized for their work, has a record of problematic offenses? Knowing this information, listening to their songs or watching their films becomes a moral dilemma. You can’t choose the path of willful ignorance and turn a blind eye. You want them to be better. But is that even a possibility? There are plenty of other artists out there, ones who produce great work and generally strive to be good people. As art is a reflection of the artist, it’s hard for me to separate the two.

It’s not a perfect analogy, but it’s the problem I have with Uber and Lyft.

After the headache-inducing madness of Proposition 1, their departure from Austin feels almost cathartic. There’s hope for a fresh start with a new ride-sharing company that preserves the innovation of the service while pairing it with genuine care for driver satisfaction and rider safety. The $8.6 million Ridesharing Works campaign felt false, like a lover who spends outrageous amounts of money when all I’m asking for is concern for my well-being.

Prop 1’s failure was a public call for corporate ethics

The City of Austin needs ride-sharing companies.  We all know the spiel. Transportation network companies (TNCs) fill a gap in the market of our lively, boozy city that lacks the developed public transportation systems of other US metropolitan cities. They’re cheap and convenient. They provide jobs and reduce drunk driving.

There are definite benefits to the ride-sharing work of the world’s two most powerful TNCs. But in a debate over company ethics, the majority of Austin voters decided that the end doesn’t justify the means. And I’m with them.

The botched Prop 1 campaign was bad business in a larger sea of oil stains across the globe, the biggest stain being Uber’s notorious reputation for combating criticism with advertising influence (read: lots of money) instead of meaningful self-reflection.

Let us not forget: Uber’s VP of Business Emil Michael drew controversy in Nov. 2014 at a high-profile NYC dinner when he suggested that the company should hire a task force of its own researchers and journalists to dig up the personal information of reporters behind negative media coverage of Uber.

Dinner joke or not, off the record or not, his statement is illustrative of the standard by which Uber has reacted to lawsuits and attempts at government regulation around the world: With a well-funded plan of retaliation.

Can Uber play ethical catch up?

Jeff Cherry of The Conscious Company Magazine posed a reasonable question about the “missing link” of Uber’s ethics:

“How much better could the company be, how much more value could it be creating if only it paid as much attention to innovating on its cultural model as it has on its competitive model?”

It’s a conversation we need to be having, but with all the blame tossed and bad blood, it’s hard to bring people to the table to chat. Cherry argues that an ethical mindset is instilled in a startup at its inception. Could Uber, now a 7-year-old global company worth billions of dollars, play catch up, if it wanted to? And the more important question, do we want it to? Or is it time to invest in another TNC (eyes are on GetMe in Austin right now, as many Uber and Lyft drivers have already made the transition) to get things right?

Personal bias, because politics are personal

To put my perspective into context, here’s a quick profile on me and my relationship to TNCs:

Like many Austinites, I thought cabs in Austin were too expensive and didn’t use them often. I also didn’t get my driver’s license until my senior year of university, so I’ve had a lot of experience with Cap Metro. But bus routes are limited and navigating the system takes time, so I welcomed Uber and Lyft into the Austin market in 2014 with open arms and have used both services frequently since then. I’m also an infrequent Uber driver; I downloaded the partner app last March during SXSW when a friend referred me, but I don’t rely on the service as my main gig and I haven’t driven in months.

When I wrote about the proposed City Council regulations last November, I fed into the #KeepAustinUber campaign. Even though there was life before Uber, I couldn’t envision how I got from Point A to Point B in pre-2014 Austin. I’d grown dependent – even worse, complacent.

I didn’t smell bullshit until later in the mess of the Prop 1 debate. Now there’s such a giant stain left behind, it’s impossible to ignore.

Uber’s regretful but “Thank You” mass email sent out to all drivers on Saturday night announcing its departure, with its disappointed tone and a promise that it’ll keep fighting for Austin, felt like a slap in the face to drivers. 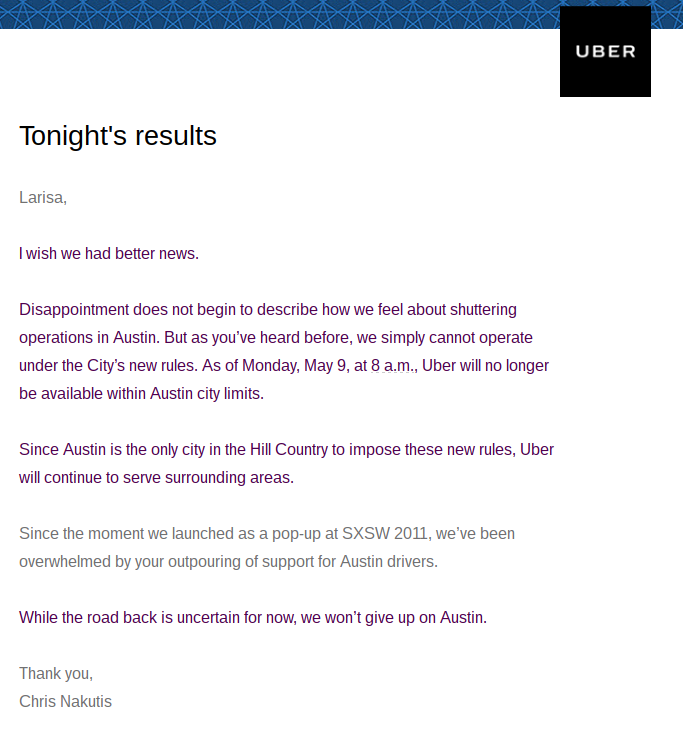 To be clear, I’m usually an early tech adopter and a big proponent of tech innovation to address societal issues. But as much as I want to use Uber and Lyft’s services, I can’t support them in good conscience. Not after Prop 1, or a simple Google search. The trust’s just not there.

And finally: I didn’t (couldn’t) vote on Proposition 1. If I could, I would have voted against it.

Conscious consumerism in a globalized economy

With an increasingly globalized economy, it’s difficult to be a conscious consumer. The decision for conscious capitalism requires that we persistently challenge our purchases, from what we eat to where we shop, and now, which transportation initiatives we use.

But we have to try. It’s not too much to ask for a company that can blend purpose and profit, interacting with all of its stakeholders in an authentic way and addressing legitimate safety concerns without waging a war on regulation that sacrifices entire markets of people in the crossfires.

So I challenge Uber and Lyft to be better and to use the loss of Proposition 1 as a moment of internal reflection. Not just in Austin, but all over the world. What’s ethical isn’t always convenient, but it’ll go a long way with consumers in the long-run. I’m thankful for the innovation, but I want the company values to back it up.