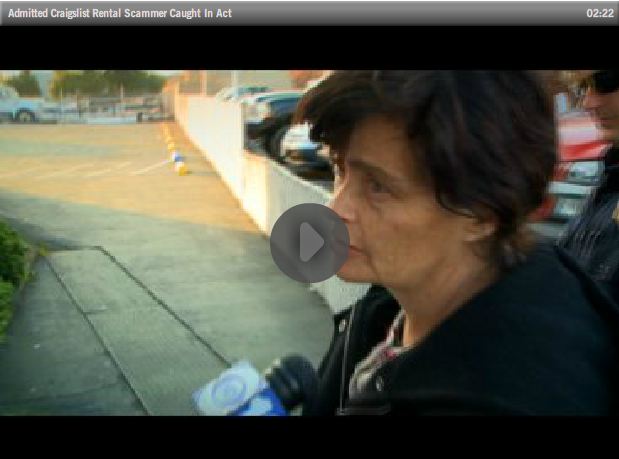 When a young couple was recently scammed out of $850 they paid to what they thought was a landlord, their friends set up a sting to catch the woman posing as a landlord on properties she didn’t own, and lined up the Yuba City police and CBS13 to be there when the sting was executed.

In the video above, an older woman doesn’t run, she doesn’t act fidgety, she admits in front of the cameras that she stole from the couple and although she didn’t admit to having scammed anyone else, the police pulled rental applications out of her purse. She apologized and appeared to be calm yet very sad as she was cuffed and taken to the police vehicle.

The San Bernardino County Sheriff’s Department confirmed with CBS13 that the woman’s name is Sherri Heschong, and goes by dozens of names in her Craigslist ads where she allegedly poses as a landlord, takes application fees and deposits on properties she does not own. The Sheriff’s Department says she was arrested in September on two felony charges, then failed to appear for at least one court hearing.

Craigslist scams are unfortunately not uncommon and it can be difficult for people to tell the difference between a landlord. Craigslist warns against scams and gives tips on how to avoid them as well as report suspected scams and the Better Business Bureau offers the following tips on avoiding rental scams:

• The email addresses they use usually are from yahoo, ymail, rocketmail, fastermail, live, hotmail and gmail, and they also post ads under anonymous craigslist addresses. They frequently change their aliases.
• The deal sounds too good to be true. Scammers will often list a rental for a very low price to lure in victims. Find out how comparable listings are priced, and if the rental comes in suspiciously low, walk away.
• They use photos stolen from other property advertisements or from home furnishing catalogues or hotel websites.
• They use fake names, often stolen from Facebook profiles or networking sites. Often they assume the identities of previous victims.
• What they all have in common is that sooner or later you get a request to transfer funds via Western Union, Moneygram or some other wire service.
• Never under any circumstances, wire money at the request of any prospective “landlord” via Western Union, Money Gram or any other wire service.  Even if they tell you to wire the funds to a friend or relative’s name “to be safe,” it’s a trap!
• Never send a scan of your passport or other ID.  These thieves will use your identity to scam others. Ask to see the landlord’s ID – record all the information you can from it.
• Use a browser to search for the person’s name who you’re dealing with. Be sure to add quotes around their name. You could add the words “fraud” or “scam” at the end of your search terms.
• Use reverse directory look up if the person has given you their telephone number. It’s important to double check that they are who they say they are.
• Visit the local county courthouse to look up property ownership for the apartment in question. Who really owns it? Is it the person you’re dealing with? Or someone else?
• Scan any provided photographs carefully. Do they match up with what you’ve seen in person? Do they look like they all came from the same place?
• They don’t ask for an application or permission to check your credit? That’s a red flag!
• Considering the current state of our economy and the rise in foreclosures, ask the landlord if they’re current on their mortgage payments, and then get their answer in writing.
• Consider using another method for obtaining a rental, i.e. real estate agent, going through a rental agency, etc.
• Always check bbb.org to see if the “company” has any complaints.