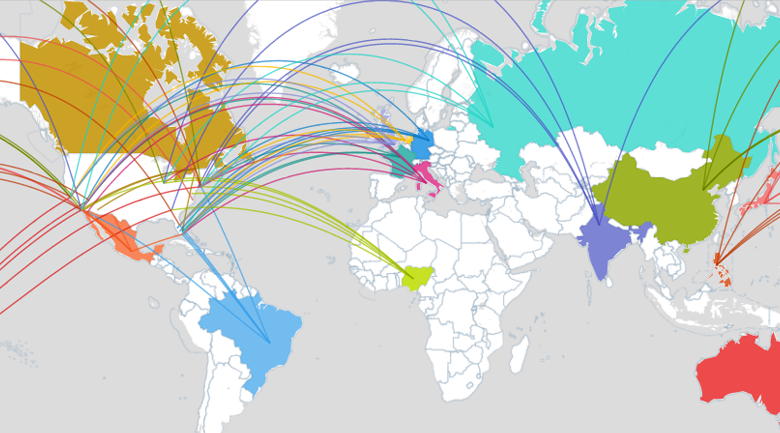 In Trulia’s International House Hunter Report released Tuesday morning, the real estate search company reports that the foreign share of American home searches fell, but points out the silver lining that despite increasing housing prices, real estate in the States is seen as among the safest investments.

Based on all home searches on Trulia between April 1 and June 30, 2012, the report tracks which U.S. metropolitan areas prospective foreign buyers are looking at and how that has changed over time. The report notes that the foreign share of U.S. home searches fell nearly 10 percent year over year.

In a statement, the company said, “Since the housing bubble burst, falling home prices across the U.S. real estate market have attracted foreign home searchers, most notably from Canada, the United Kingdom, Germany and Australia. However, U.S. asking prices rose nationally 0.3 percent Y-o-Y in June after years of price declines. As a result, foreign searches – as a share of all the searches on Trulia – fell by nearly 10 percent in the last year. In the past year, the share of foreign-based searches has dropped the most in local markets where prices have risen the fastest.”

Trulia reports that foreign buyers spent $82.5 billion on U.S. residential real estate in the last year, but as prices continue trending up, as they have in 84 out of the 100 largest metros quarter over quarter, buying habits could change as investors are turned off by the price increases.

Miami and Los Angeles are still very highly favored in searches for American real estate by those outside of the nation, with 60 percent of all foreign searches landing somewhere in Florida. Below is Trulia’s outline of the top most searched cities coming from abroad:

In the Eurozone crisis nations, banks are failing, and debt is piling up, but U.S. real estate is still viewed as a relatively safe investment.

“Although Europe’s financial troubles have been a global economic threat, the Eurozone crisis had a silver lining for U.S. housing in 2011 as Europeans looked to American real estate as a safer investment,” said Trulia’s Chief Economist, Dr. Jed Kolko. “Last year, the share of searches from Greece, Spain and Italy increased, bucking the international trend. Now, however, the foreign search share is declining even from those Eurozone crisis countries.”

Dr. Kolko concluded, “Foreigners attracted to real estate bargains get turned off when prices increase. Investors want to buy when prices are at their bottom, but they’ll start to lose interest when prices rise 15 percent, as they have in Miami and Phoenix. Demand by people looking to scoop up bargains can dry up quickly when prices rise.”

Foreclosure rate for homeowners over 50 up fivefold