According to the Zillow Real Estate Market Reports for February, national home values remained flat, rising only 0.1 percent from January, but the real estate media company is quick to point out that February marks the 16th consecutive month of home values rising, marking the second largest annual gain since August 2006.

The last time national home values were at this level was in June of 2004. Home values rose 5.8 percent from February 2012, with values projected to rise 3.2 percent over the next year.

Studying the 30 largest metro areas covered by Zillow, the company determined the Average home value is now at $158,100, and with the long streak of improvements, regardless of size, the housing market recovery is gaining some traction. Meanwhile

“The housing market recovery has continued to gain momentum over the past several months and looks firmly entrenched as we enter the 2013 spring home shopping season,” said Zillow Chief Economist Dr. Stan Humphries. “We expect that rising home values will continue to help cure many of the ills still facing the housing market, including high levels of negative equity.”

Dr. Humphries added, “Rising home values will free many more homeowners from negative equity, allowing some of them to list their homes for sale which, in turn, will ease supply constraints. Burgeoning new construction will also help bring more supply into the marketplace. As more supply comes on line, home value appreciation rates will moderate and stabilize, marking the final transition from a recovering market to a healthy and sustainable market.”

Although national rents also rose only 0.1 percent in February for the month, rents rose 4.5 percent for the year to $1,282. Comparing the annual and monthly improvements of home values versus rents, no major metro area saw a decline in home values for the month or the year, but rents did. Landlords have taken advantage of the market and steadily increased rents, but the bubble is popping and rent increases will be slowing in the coming year. 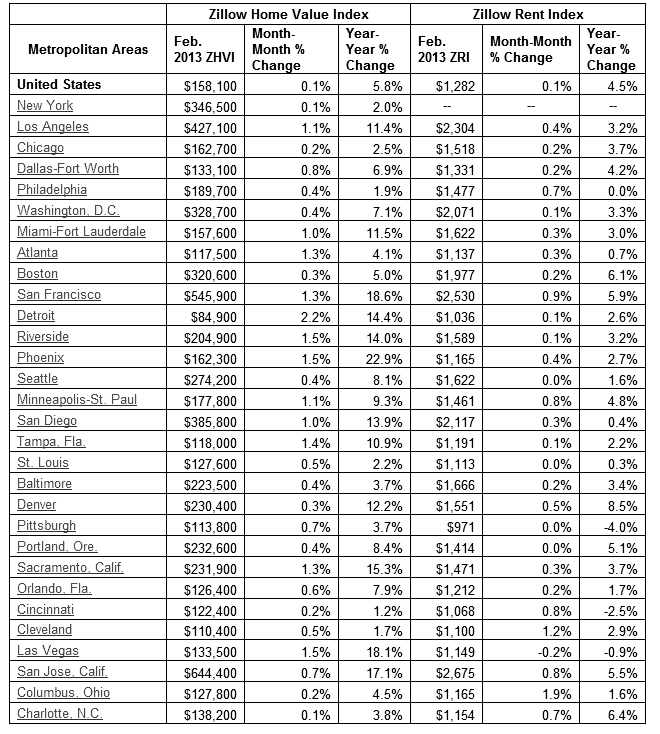