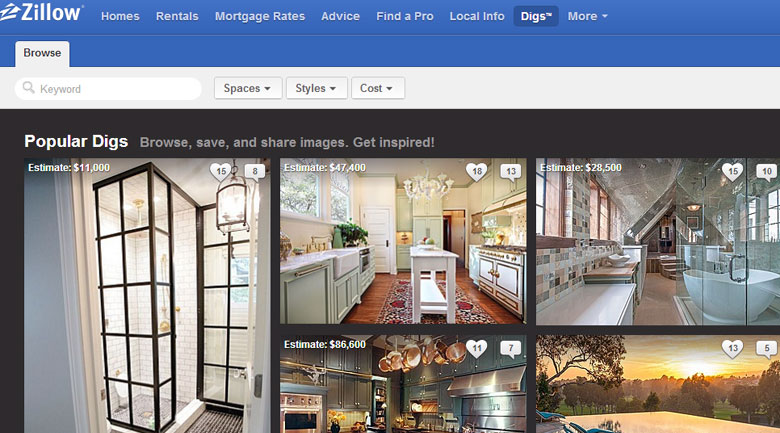 Zillow Digs has officially launched, taking on home improvement in a way that looks like what we imagine Pinterest, Houzz, and Tumblr would make if they got together and had a baby. The launch focuses on visual inspiration and a breakdown of the real cost of remodeling projects based on where they live, giving consumers an instant reality check (and not necessarily in a bad way). While viewable on the web, the iPad app is pretty sweet.

The company says, “Couch surfing and shopping for home improvement is a very mobile experience, and Digs is the first marketplace Zillow developed on mobile before the desktop, reflecting the company’s increasing mobile utilization.”

Zillow Digs features tens of thousands of photos that users can peruse, and when signed in, they can create, save, and share Boards of ideas they love. Users can comment on photos or even follow people with similar interests, and even connect users with local home improvement professionals who create a free profile on the site (with contact info, photos of their work, site links, etc.). The timing couldn’t be better, as home remodeling recently hit a seven year high.

“Tens of millions of home buyers shop for homes on Zillow each month, and home improvement is a natural next step for us in consumer empowerment and transparency of information to help people make smarter decisions,” said Spencer Rascoff, CEO at Zillow. “I’m also excited to introduce a revolutionary new tool for consumers: Digs Estimates. This first-of-its-kind remodeling cost estimate algorithm was created by Zillow’s industry-leading team of economists and data analysts who produce extensive housing data and research.” 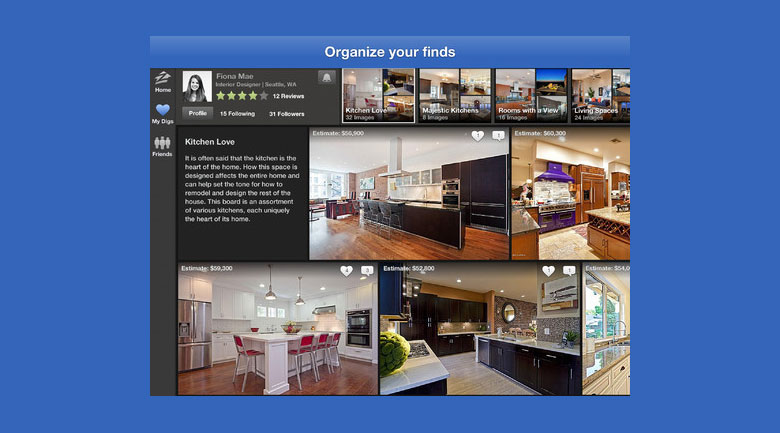 Why Zillow Digs is an interesting move

For Zillow, it’s not only a smart move because it adds more places to advertise and improve revenue, but with each user that signs up, they’re entered into the Zillow ecosystem, and through use of Zillow Digs as branding, they’ll also be in the email database, so we assume they’ll get occasional emails from Zillow, so where will those users remember to go when it’s time to search for real estate? You got it.

Although the move is a very smart one, and could put Zillow ahead, especially in traffic, they are the only real estate search company that hasn’t weighed in this month about data accuracy as Realtor.com and Trulia make competitive claims about the quality of their core offering – real estate listings.

Will Zillow weigh in, make any data changes to keep up, or will the continue to expand in more ways similar to Zillow Digs to get new eyeballs? Data or eyeballs?