What your social media posts say about you

Reposting things we like to our walls, feeds, and blogs have become almost second-nature, but have you ever thought about what all those posts say about you? What you post may be more telling than you think. There are numerous tools available to scan through your feeds to indicate who you truly are. While this can be a good laugh with friends, what would it say to a hiring manager or potential client?

The application’s predictions are based around the Big Five personality traits: the leading personality theory in modern psychology. Five’s web site defines each term which may give better insight into what their algorithm hones in on to “define” your personality:

Agreeableness: A tendency to be compassionate and cooperative rather than suspicious and antagonistic towards others. It is also a measure of one’s trusting and helpful nature, and whether a person is generally well tempered or not.

Neuroticism: The tendency to experience unpleasant emotions easily, such as anger, anxiety, depression, and vulnerability. It can also refer to the degree of emotional stability and impulse control.

Conscientiousness: A tendency to be organized and dependable, show self-discipline, act dutifully, aim for achievement, and prefer planned rather than spontaneous behavior.

Openness: Appreciation for art, emotion, adventure, unusual ideas, curiosity, and variety of experience. Openness reflects the degree of intellectual curiosity, creativity and a preference for novelty and variety a person has. It is also described as the extent to which a person is imaginative or independent, and depicts a personal preference for a variety of activities over a strict routine.

Extraversion: Energy, positive emotions, surgency, assertiveness, sociability and the tendency to seek stimulation in the company of others, and talkativeness. 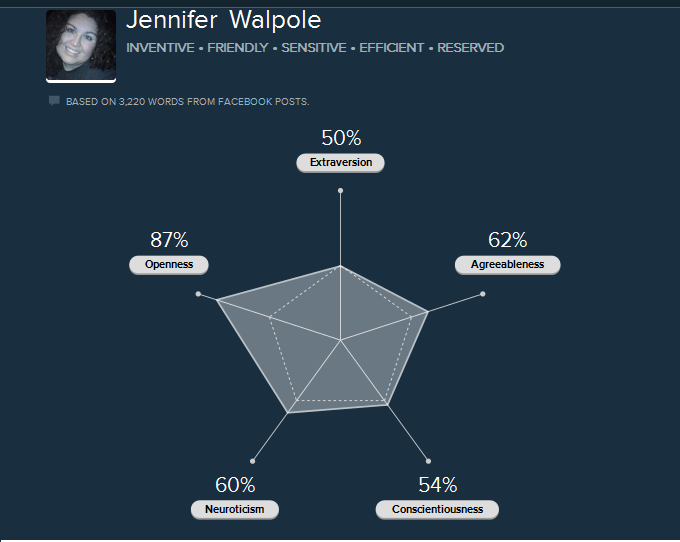 Based on other people’s reaction on Twitter, the results are pretty accurate. Founder of Five, Nikita Brier, to the New York Times “people seem to identify pretty strongly with the personalities we generate. Only about ten percent say we were outright wrong about them.”

Outside of using this as a tool to analyze people, it could also be an effective marketing tool; given the statistics that only ten percent of people disagree with the results. If 90 percent of people agree with the results, you can use this tool as an insight into what products may go over well with someone who is extraverted versus someone who scores higher in the neurotic category. Even if you do not take it too seriously, it is a pretty neat tool to analyze your social media behaviors.