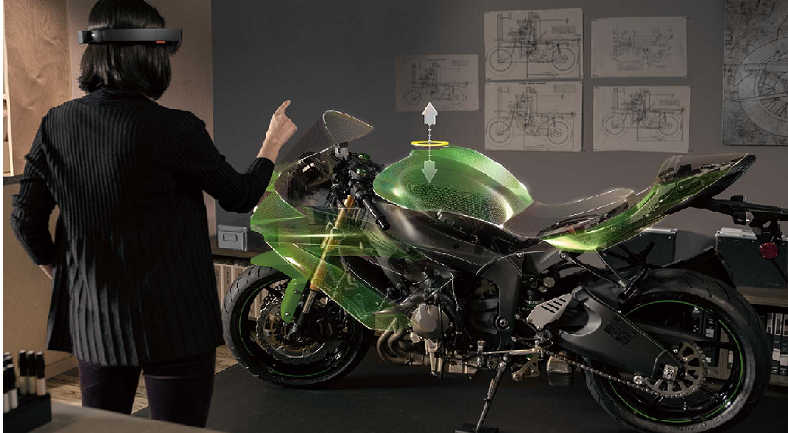 Everyone seems to be talking about Microsoft lately; from the features of Windows 10 to the creation of Spartan, everyone wants to know what is next for Microsoft. However, the most recent discussions have been centered around their new holographic headset design. You may remember from our converage on Windows 10 that the new operating system will contain holographic capabilities and their headset will possess the ability to fuse the real world with the digital realm. This new fusion will allow the user to literally step into the action.

The new wireless holographic headset is called HoloLens and can be used without the need of a computer or phone. It has its own CPU and GPU, as well as a new “HPU” (Holographic Processing Unit), which Microsoft designed especially for this type of interaction. The HoloLens is quite similar to the Oculus headset. Both headsets are transparent, providing an optimal view of the real world, while allowing the user to emerge themselves in the advanced 3D graphics.

The HoloLens touts the interactive virtual reality as its selling point over competitors, demonstrating the potential advantages it would provide for collaboration, engineering, research, telecommuting, and design work. Augmented reality has been mostly linked to mobile technology up to the post, but the potential for a stand-alone, quality virtual reality experience could truly distance the HoloLens from the competition.

Microsoft states, “HoloLens goes beyond augmented reality and virtual reality by enabling you to interact with three-dimensional holograms blended with your real world. Microsoft HoloLens is more than a simple heads-up display, and its transparency means you never lose sight of the world around you. High-definition holograms integrated with your real world will unlock all-new ways to create, communicate, work, and play.”

There isn’t a screen to touch or a mouse to click. Use gestures to create, shape, and size holograms. Use your eyes to navigate and explore. Use your voice to communicate with your apps. HoloLens understands your movements, vision, and voice, enabling you to interact with content and information in the most natural way possible. Pretty futuristic and the gestures are comparable to what Google Glass was going for with its design.

Micrsoft CEO Satya Nadella used the HoloLens to control and experience a firsthand point-of-view of a Mars rover, now if that’s not cool, I don’t know what is. The bottom line with HoloLens is it merges the best of a live real-world view with an enclosed 3D graphic immersion, making for a more convincing holographic experience. Sounds like the future is here and it looks pretty amazing.

In this article:hololens, microsoft, Windows 10