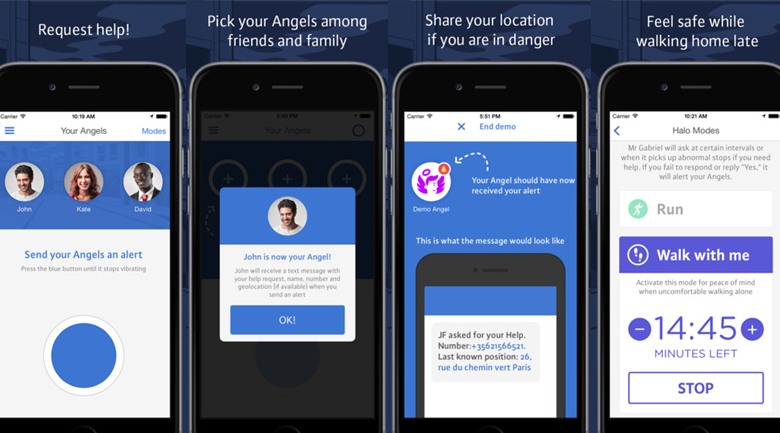 Imagine you’re a 23 year old young lady just starting out in real estate, let’s say. You get a call from someone that wants to see two houses up the street from you, and you hop in the car to open that door, hungry for a sale. But you don’t know who the caller really is, and no one knows you’ve left to show homes. You get a bad vibe from the couple who doesn’t ask anything about the house, but follows you around the dark interior until they corner you in a closet.

Do you think they’re going to let you dig in your purse for your phone so you can call 911 or maybe even find your safety app, trigger it, and wait for a response? Nope.

But with an inconspicuous tap of your Apple Watch, help could be on the way if you have the Mr. Gabriel personal safety app. Founder and CEO Virginie Gretz is a former Googler who has actually been in a troubled situation, having fallen and been forced to crawl for nearly ten hours to grab a phone in the next room. Imagine if she could have just tapped her watch and alerted her top three contacts (called “Angels”) of her name, number, and exact location without having to type a damn thing.

Mr. Gabriel users can manually activate the alert OR they can choose one of the preset modes (called Halo Modes) which currently include “Run,” or “Walk With Me,” to set a surveillance time during which the Apple Watch sensors will pick up any suspicious moves and automatically alert Angels if they don’t respond to the prompt asking if they’re okay.

Geolocation is only requested and sent when an alert is triggered. In the next iteration, geolocation will be updated every 15 minutes once an alert has been triggered: this is specifically intended for abduction cases or when the victim is being moved.

Take a look at how it works:

How Mr. Gabriel is different than competitors

The personal safety app pool is deep and there are endless competitors, but the truth is that most of them are no longer active, and none as comprehensive.

Mr. Gabriel addresses the very real issue of 911 being flooded with non-urgent calls, sometimes forcing urgent calls to wait – it uses your contacts like filters as the first touch point, so be sure your “Angels” understand their responsibility.

It’s also different because incorporating the watch means it’s always there – no falling and crawling, no fighting an attacker to let you use your phone, just an inconspicuous tap (we recommend practicing being discreet and having it readied when you’re alone).

Most apps allow you to tap-to-alert, but the Mr. Gabriel sensors can be activated for surveillance of our movements and send an alert if it detects you can’t respond to the prompt asking if you’re okay.

Privacy is a huge issue, and several competitors have been hacked and used to scam the elderly. With Mr. Gabriel, geolocation is only picked up when an alert has been activated.

The app is free and will offer in-app purchases in the future, but we’re watching them expand to partner with companies to scale at enterprise level (having done a deal last with with a major insurer who will be offering it to their clients).

Whether you’re in frequently dangerous situations or you just run solo, this is the personal safety app that actually makes sense to us.