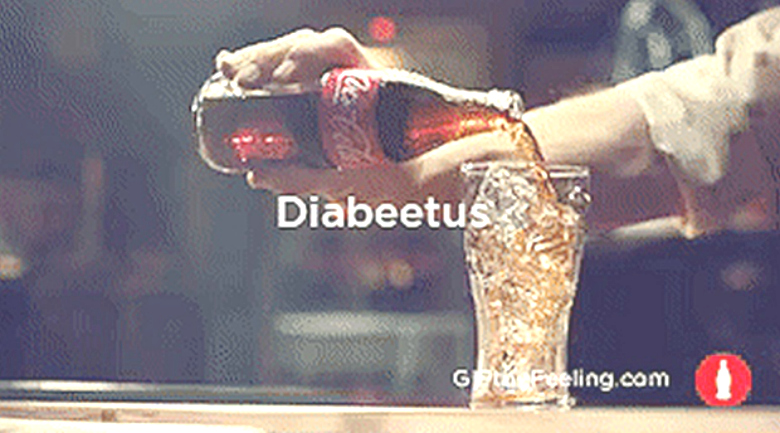 Last week, Coca-Cola ditched their 7-year-old slogan “Open Happiness,” in favor of the fresher “Taste the Feeling.” However, the brand is now “tasting the trolls” instead, because it didn’t take long for the Internet to reinterpret Coca-Cola’s new advertising campaign.

Unfortunately for Coca-Cola, their newest attempt at promoting their new slogan “Taste the Feeling” has fallen into the creative hands of a few deviants. The company created a gif maker that allowed people to submit captions for a preset number of gifs. The gif maker allowed unlimited submissions to a companion bona fide caption contest. The new advertising campaign was meant to get customers to interact with the brand’s new slogan, but instead it became the butt of internet jokes.

After dropping their previous slogan of 7 years “Open Happiness”, the company needed a way to spread the word about their new slogan. With their new “Taste the Feeling,” the company hoped to combine the dozens of drinks under the Coca-Cola brand into one commercial identity. As Coca-Cola says, the new slogan “puts the focus back on the product.”

Memes ripe for the picking

Coca-Cola promoted the slogan with a gif maker that lets people add a feeling overlaid on top of a massive gif created by Coke. Gifs range from the neck of a Coke bottle bursting forth with the eponymous brown soda to a guy convulsing with laughter at, what else, a cat licking his toes. Other gifs include a guy jumping into a pool with a coke bottle, a guy breakdancing in a onesie, and a girl skating with multi-colored smoke coming out of two coke bottles.

However, Coca-Cola’s advertising department failed to think one step ahead of the internet community. By allowing captions on gifs the all-American company invited internet trolls to have their way with what exactly feelings can taste like. Instead of captions about wholesome exhilaration and happiness, deadpan captions like “DIARRHEA” over the exploding coke bottle (there is a resemblance) and “I’m into feet” over the cat licking toes gif, filled Coca-cola’s page GIFtheFeeling.com as trolls found the perfect fodder.

What did you expect, Coke?

Coca-Cola has since responded with the comment: “Our intention is to invite people to share their feelings in fun and uplifting ways as they discover our new ‘Taste the Feeling’ campaign. While the vast majority have used ‘GIF The Feeling’ in positive ways, it’s unfortunate to see that some people have chosen to use our campaign to do just the opposite.”

Fortunately, this hasn’t caused Coca-Cola to shut down the gif maker. Head to their site to create your own “Taste the Feeling” gif. To see gifs created by others, check out the #Coca-Cola tag on Tumblr. If you dare.