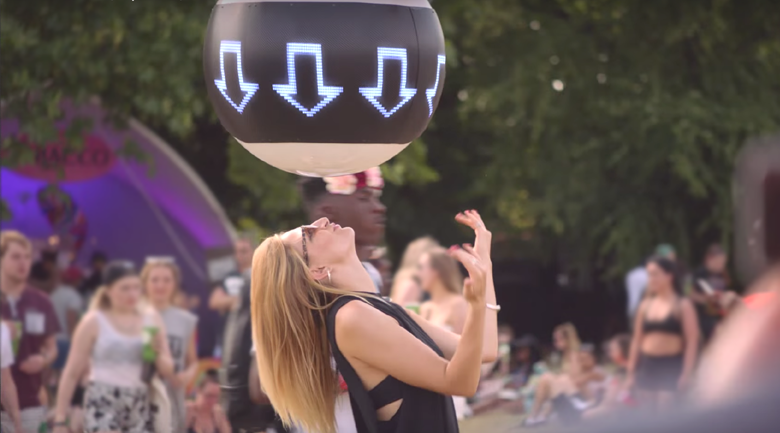 Pepsi gets creative and sends in the drones

From the looks of its latest marketing video, Pepsi has been crafting some pretty creative technologies to catch the attention of young music lovers at concerts. Claiming that one third of people lose their friends in the crowd at large musical festivals, the beverage company hoped to alleviate this problem with its Pepsi Max Friend Finder app. Supposedly, attendees at the New Look Wireless Festival in London could download a smartphone app that activated a GPS enabled drone that would help you find your lost friend in the crowd.

The drone, about the size of a beach ball, looks like a cross between a blimp and a Pokemon. Its wrap-around screen displays arrows and other visual cues to guide disoriented concertgoers to wherever their friends have wandered off to. Pepsi Max’s video shows many awestruck twenty-somethings gawking at the hovering robot, as well as many happy reunions.

Check out the drone in action:

The video is targeted towards attendees of the “maximum festival” but who have designated “no meeting point” to keep their friend group together. The language evokes Pepsi Max’s motto, “maximum taste, no sugar.”

The concept is cool, but is just a publicity stunt

Unfortunately, the video was no more than a publicity stunt, and the friend finder drone is just an idea, albeit, and inspiring one. The concept was crafted by the AMV BDO advertising agency, who specializes in ambient advertising and targeting young, jaded consumers whose attentions are hard to capture with traditional marketing methods.

The Friend Finder points to a growing trend in using interactive and ambient advertising as an alternative to more common marketing channels.

Despite the fact the whole thing was staged, the video was a huge marketing success and has gone viral online.