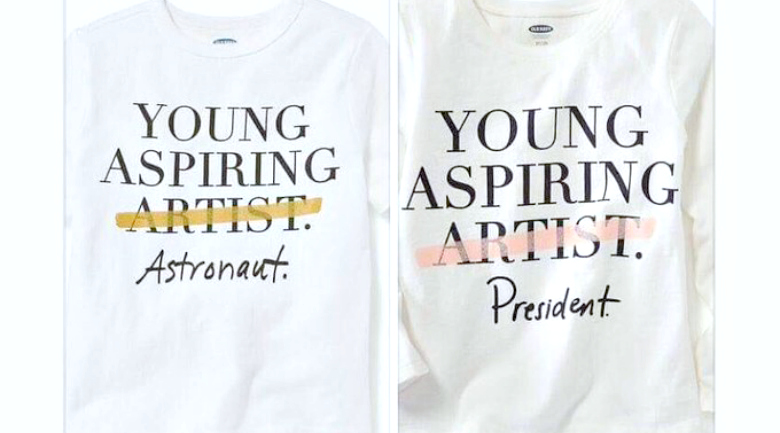 Graphic tees are often a fun staple for retailers. This week, however, retail bargain giant Old Navy was forced to pull their latest toddler T-shirt after it sparked controversy online.

The toddler shirt in question was white and featured the words “Young Aspiring Artist.” However, the word “artist” was crossed out and beneath read either “president” or “astronaut.”

Old Navy released the graphic tee in late December and it immediately drew a wave of controversy from the online community. Social media users criticized the retailer for stifling children’s creativity. Users took to Twitter and Facebook, to express their disappointment that the shirt’s message implies young kids shouldn’t dream of becoming artists.

Read also: Rent the Runway now has its own line – and there’s already controversy surrounding it

Art school and gallery in New Jersey, Perkins Center for the Arts, wrote on Facebook, “The artists and young aspiring artists at Perkins Center are very disappointed in your t-shirt. Don’t forget, many of our astronauts and political leaders have an arts background too.”

Other comments poured in via social media. Another user wrote, “The fact that Old Navy is saying that being an artist isn’t a respectable profession and promoting that in children’s clothing is ridiculous! They’re discouraging kids from expressing their creativity!” The controversial t-shirt also spawned the hashtag #ArtIsACareerToo, and has been used thousands of times on Twitter.

Old Navy has since pulled the “Young Aspiring” tees from its site and announced that it is taking steps to remove them from stores after the wave of social media outrage.

Regarding the decision, Old Navy spokesperson Debbie Felix said in an emailed statement, “At Old Navy we take our responsibility to our customers seriously. We would never intentionally offend anyone, and we are sorry if that has been the case. Our toddler tees come in a variety of designs including tees that feature ballerinas, unicorns, trucks and dinosaurs and include phrases like, ‘Free Spirit.’ They are meant to appeal to a wide range of aspirations. With this particular tee, as a result of customer feedback, we have decided to discontinue the design and will work to remove the item from our stores.”

If anything, Old Navy has proved the arts are nothing to cross out. While it may be discontinued, the tee has already sparked several clever redesigns by artists.

In this article:apology, Marketing, Old Navy