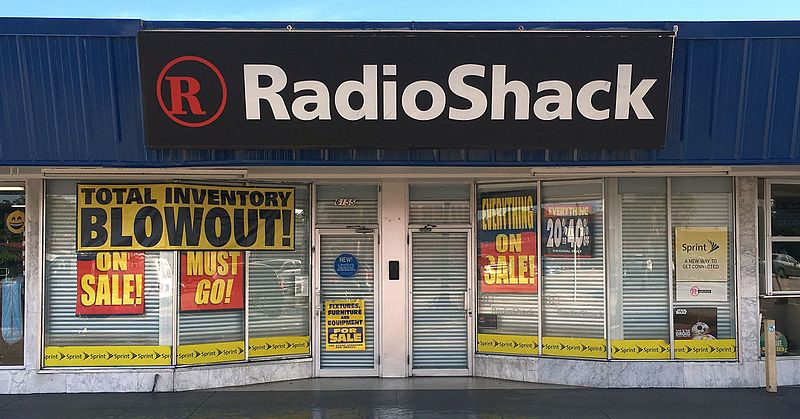 Looks like RadioShack’s parent company General Wireless may be facing the same bankruptcy destiny as its child. According to insider who spoke to Bloomberg, within the next couple of days General Wireless could be filing for Chapter 11. This would result in a liquidation of the company.

General Wireless has been quietly shutting down stores across the country. So far 200 stores have already closed.

Founded in 1921, Radioshack has been around for nearly a century, but this final bankruptcy could lead it to a grave just shy of 100. Over the years, RadioShack has seen many initiatives meant to save it from profitability issues.

In 2006, nearly 500 locations closed to reduce customer competition between stores.

However, this lead to plummeting stock prices and further staff cuts.

Then in a jackassedly phrased email, RadioShack cut a fifth of its work force and received public backlash for their lack of sensitivity in handling the matter. Yet somehow it managed to survive for nearly another decade.

While drowning in debt, RadioShack flailed and managed to grab hold of some partnerships.

Oh yeah, and that time they sponsored Lance Armstrong as Team RadioShack before the steroids scandal.

Hanging on by a thread

When RadioShack filed for bankruptcy in 2015, it was purchased by Standard General, a hedge fund turned company under the name General Wireless.

The company used RadioShack’s debt as currency in the transaction, which preserved jobs and eased the retailer’s debt.

RadioShack also stayed afloat by the grace of a Sprint partnership.

However, these measures haven’t been enough to stake out a stronghold in a market where online retailers reign supreme.

Competing with online retailers is a continuing challenge for businesses across the board.

Small businesses and decades-old chains like RadioShack are all trying to adapt to a changing marketplace.

How can retailers survive?

Consider the reasons more customers are turning to online shopping. Of course it’s more convenient to order something from your couch.

Google isn’t going to make you feel stupid for asking about an aux cable or speaker positioning.

But sometimes it is infinitely more helpful to have an actual person helping you figure out solutions to specific questions.

Killin it in customer care

Plus, I would rather drive somewhere than wait at least a week or pay extra for expedited shipping.

Especially if the business makes a point to at least appear like it cares about my patronage.

Make sure you’re listening to your customer’s needs and adapt accordingly.

In this article:bankruptcy, Radio Shack, The News