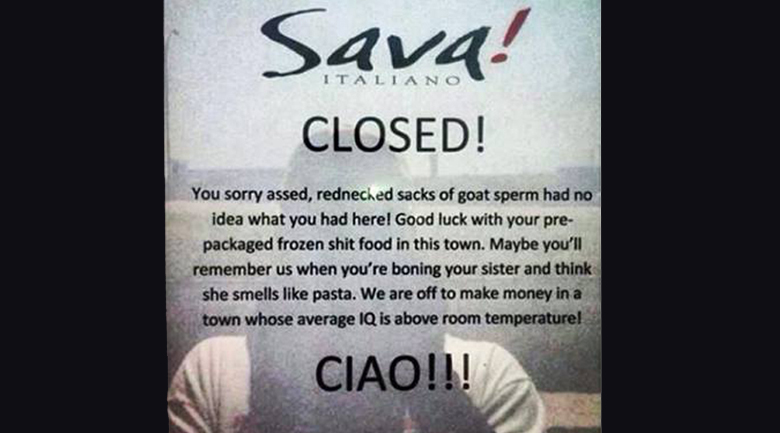 According to a post on Reddit that is going viral, Sava! Italiano restaurant recently closed up shop in Amarillow, and allegedly had a sign in their window that read:

“You sorry assed, rednecked sacks of goat sperm had no idea what you had here! Good luck with your pre-packaged frozen shit food in this town. Maybe you’ll remember us when you’re boning your sister and think she smells like pasta. We are off to make money in a town whose average IQ is above room temperature! CIAO!!!”

There’s a pretty good chance we’re about to watch another version of Amy’s Baking Company unfold.

Restaurant owner Mark Coffman told Grub Street that it is a hoax, a prank pulled by a former employer, claiming “Nobody ever saw it up and it is not up now. It appears somebody put it up, took a pic and then took it down.”

On their Facebook page, the restaurant said, “Don’t believe all you hear and see folks!” and comments that the act is “totally malicious!”

There are several possible scenarios here:

Could this be the smoking gun or is it a cruel hoax?

It has been observed, however, that the note could very well be real, as it mimics the owner’s writing habits even seen in comments above with a similar tone, repeated use of exclamation marks and capital letters, along with a repeated assertion that Amarillo can’t appreciate real Italian food. Coffman told the Amarillo Globe News upon closing, “We’re moving your favorite REAL Italian place to LUBBOCK!! With plans underway also for AUSTIN!! Thanks so much Amarillo! CIAO!!!”

It could be true, but it could also be a hoax, as the photo (shown above) doesn’t show the building or name the photographer. This could shake out in favor of the owner, but if it is discovered that they posted the note, the fate of their reputation lies in how they manage themselves going forward. Unsolicited advice: don’t freak out like Amy’s Baking Company did.

In this article:communications, professionalism, restaurant closing