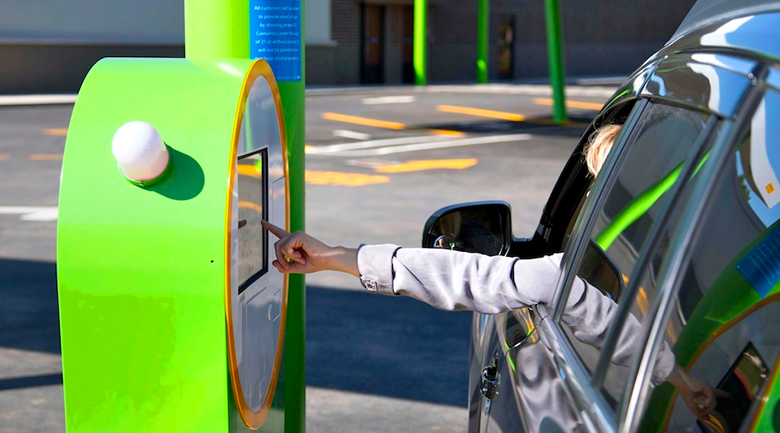 Walmart getting all European?

In Europe, Walmart’s grocery chain, ASDA has offered the “click and collect” model in recent years, allowing residents of high density areas to order online or at a kiosk and have all groceries brought out to their car without ever having to leave. In Bentonville, Arkansas where Walmart is headquartered, a new neon green pick up location has debuted as the chain’s concept store which looks quite a bit like a giant gas station.

Customers wishing to use the Pick-Up Grocery place their order anywhere from three weeks to two hours in advance, and at an appointed time, they pull up in a drive-thru lane, and enter their last name and order on the touchscreen kiosk.

Read also: Video of how dramatically different Walmart is in China

Warehouse employees get a notification and rushes the order out to the car and loads it into the trunk (or truck bed, or back of the car, depending on the vehicle). There are over 10,000 items available to order online, from produce to household items, and even alcoholic beverages.

“The customer would actually have the opportunity to review fresh products” before having them loaded in the car, the test location’s grocery manager told local TV station KFSM.

Local residents are accustomed to Walmart concept stores and products, many of which end up making the cut and spreading beyond the Arkansas landscape, while others flop (remember the Walmart Express stores that never made it beyond beta?).

“Wal-Mart is testing this format because it is a vehicle – literally – for next-stage scale-building and a complement to its small format strategy,” Carol Spieckerman, CEO of newmarketbuilders tells City Wire.

Spieckerman adds, “Wal-Mart has everything to gain as it offers yet another option for convenience-starved customers and without the overhead of its other physical formats. Shopping eats up time and can be a major inconvenience for parents with small children and the elderly and infirm. This is also a great way for Wal-Mart to make the most of its digital platform, to acclimate more customers to using it and to gather more information on its customers’ searching and shopping habits as they place orders online.”

She concludes that the while the click & collect locations are common in the U.K., this new format may have more influence in the U.S.

“It’s a pioneering move in the U.S. and that alone has the potential to bring new customers into Wal-Mart’s physical and digital ecosystem,” Spieckerman said.

In this article:business news, retail, walmart