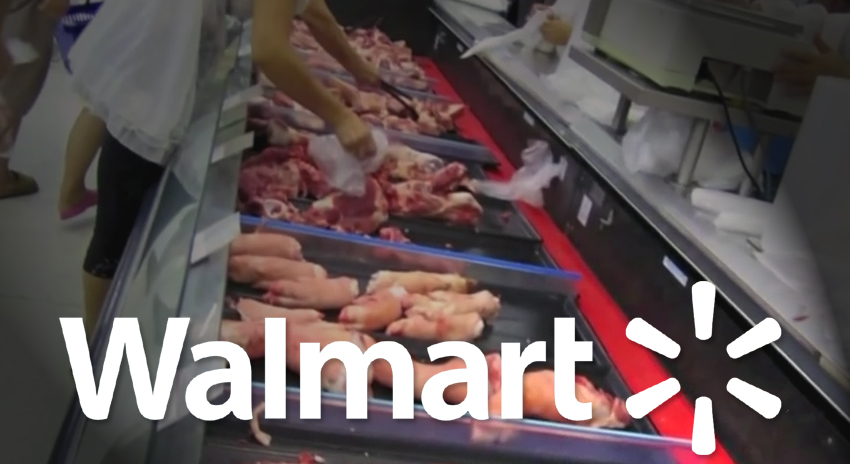 American Walmarts are the Valhalla of bargains and selection; the same is true in China, but for different items. Property is much more expensive in China, so Walmart purchases a small plat of land and creates several levels, like a mini shopping mall, instead of a single level that is spread across what seems like acres in America. However, the quantities are kept smaller in China.

Most houses in China are small and do not have room to store bulk purchases, so the stores carry less merchandise in an effort to save money. In America, purchases are made in bulk, especially paper products. Also, there are no books or clothes offered in China stores, as well as, the addition of vendors placing sales representatives in stores selling their products with hopes of getting their brand name out in to the Chinese marketplace.

Perhaps the most bizarre item, at least from my American perspective is the fresh meat. Not fresh, as in freshly packaged in plastic wrapped packages, no. It is fresh as in many stores have tanks full of live fish, frogs, eels, and turtles waiting for customers to catch with nets. You can then have your catch killed and cleaned, but you will not find any meat wrapped in plastic or Styrofoam; this idea repulsed customers. They want meat as fresh as possible.

They have even revolutionized toilet paper

They had the idea to remove the cardboard tube from the middle of the roll, enabling them to offer more rolls at a cheaper price, making it the cheaper toilet paper in the country. They also charge customer 20 cents per plastic bag to help encourage the use of reusable shopping bags.

For all the success they have in China, Walmart has still not been able to replicate the efficient logistical system it has in America, mainly because it lacks scale. There just is not enough affordable land in China for Walmart to purchase. While they continue to “give people what they want” the markets are very different and are a good reminder to businesses to know your market, your customer; and what works best for your business model.

In this article:Business, china, walmart