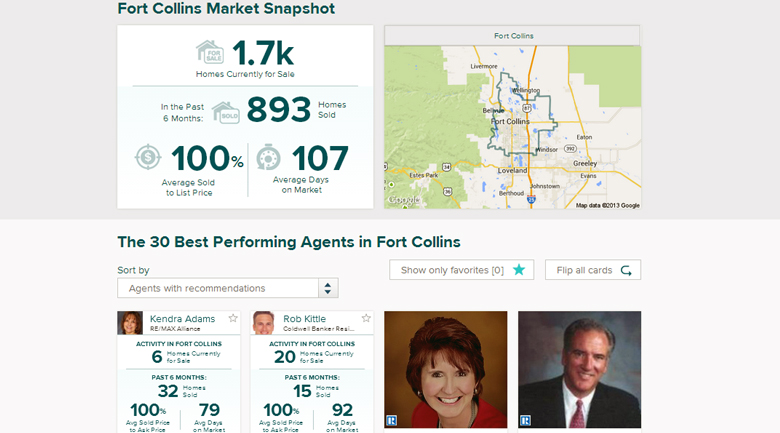 (AGENT/GENIUS) – Recently, Realtor.com has put some of their acquired talent and technology to work in an extremely beta product called AgentMatch, piloting in the Las Vegas Valley and Northern Colorado. Performance data is fed directly from the MLS, bios are populated from agents’ SocialBios profiles, and the site unveils the top performing agents in any given area – a bone of contention for a small group of real estate professionals.

According to the National Association of Realtors (NAR) Profile of Home Buyers and Sellers survey, 91 percent of consumers did not directly find their agent online, a high number that has been a tremendous part of AgentMatch’s birth, the company tells AGBeat.

AgentMatch has spent the last year in an endless loop of focus groups and use monitoring, and consumers overwhelmingly love it. Graham said, “I wouldn’t be working on this right now if I didn’t see consumers’ eyes light up.” He asserts that they are very early on in the project and are all ears to objections as well as ideas and support. In fact, they’ve already formed an Advisory Board after calling out and inviting the loudest critics to the table.

We reached out to non-realtor consumers for their feedback, and in each case, the responses were positive, even when we noted that the data may not account for teams or new home specialists. These individuals could not understand why anyone would protest it. They liked that there were not reviews, it was simply raw, unbiased data and immediate (read: real) contact information that they had been thirsting for.

Upon launching, a number of Realtors took to the web to speak out against AgentMatch, and while it isn’t surprising, much of it is based on misinformation and a basic misunderstanding of how internet users use the internet today.

Any time a website launches that adds transparency to a real estate professional’s transaction history, a nuclear explosion goes off and agents lose their mind. Why? Some of them are far less busy than they feign on Twitter, while others are, in fairness, successful regardless of transaction numbers (lead gen folks, teams, and so forth). Buyers’ agents fail to study the site and instantly claim the deck is stacked against them, but in reality, it’s not just the number of homes on the market shown in an agent’s bio; the number of homes sold appears right next to it, unlike most sites featuring agents. This has been one of the more common misunderstandings we’ve seen. 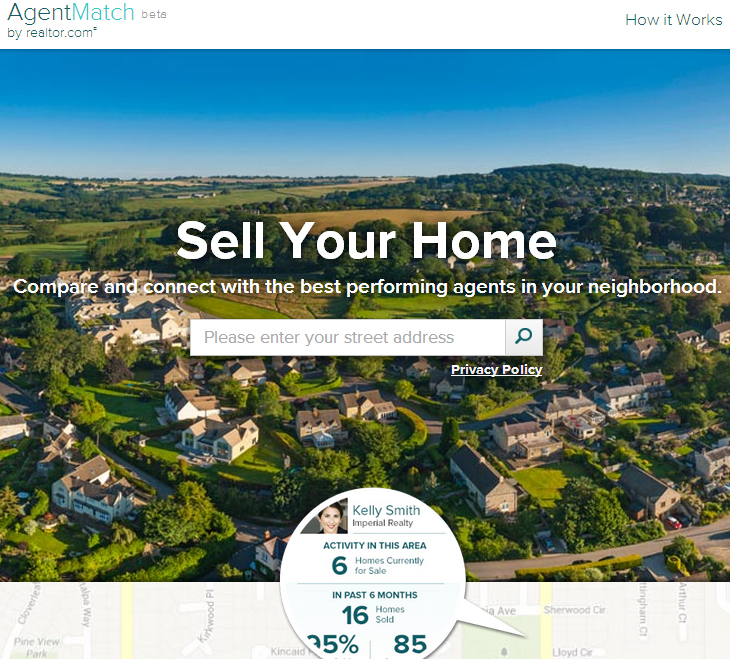 The “Find Realtors” feature already exists on Realtor.com, but the truth is that while the bones are good, it has a lot of room for improvement, particularly when it comes to getting consumers to engage more. So, after endless testing, they launched AgentMatch, and the very word “match” seems to have set the industry off.

The landing page of the site currently reads “Sell Your Home,” then “Compare and connect with the best performing agents in your neighborhood.” The word best has been a contentious word with agents who have falsely assumed that realtor.com is playing favorites with top producers, or ranking agents – but you’ll see no stars, no thumbs up, no ratings, and no stickers with words like “top producer” or “number one agent.” The truth is that the word simply tested better and increased engagement with consumers – kind of important when consumers are vetting agents.

Not seeking to influence MLS policies

Because agents cannot upload any listings to the site, and because the data is 100 percent from the MLS, some have protested. First of all, third party agent ratings sites that allow uploads often have no way of verifying the validity, leading to inaccurate data and a lack of transparency.

Graham asserted that this product will never seek to change policy at the MLS level, and agents that wish for their transactions to be fully recorded by the MLS should petition their local board (which AgentMatch says they’ll help with if requested). It makes sense to use one and only one data source in this case, as it is truly the only reliable source when you look at it on a national level, and because rules are so different between each MLS, it makes sense for realtor.com to keep their nose out of it – if they did seek to change the rules, imagine the outrage then!

What you may not be aware of is that this product wasn’t just birthed by faceless code jockeys at realtor.com, it has been headed up by the founder of SocialBios (acquired by realtor.com), and Graham spent years as a broker and a MLS Director, so his understanding of agents’ needs and objections are first hand – yet the product still has his endorsement and his acknowledgement that influencing MLS policy from their position isn’t wise or useful for anyone. 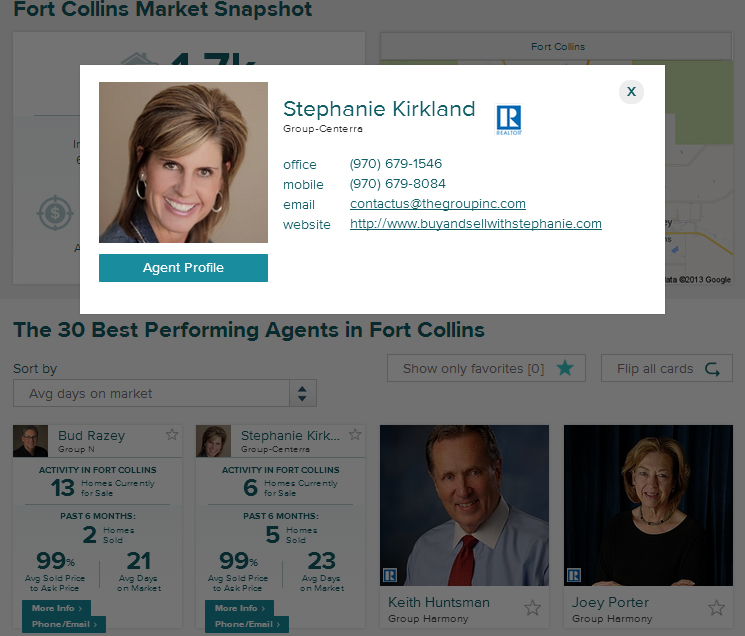 No charge for agent’s email to be featured up front

Additionally, AgentMatch features agents’ phone numbers and email address front and center without forcing consumers to register to get it (thus, they don’t act as a middle man, they instantly get to their agents of choice), and they don’t charge agents to feature their information on the site – a far cry from their competitors, who agents have complained for years about their featuring competitors’ information on their listings pages. None of that, just simple contact information. This fact has been wildly overlooked, particularly by the people who railed against their information being hidden or sold by other companies.

What agents protesting this site have missed is that consumers are more sophisticated today than a decade ago, and they have diverse goals. Agents, so often wrapped up in the mentality of the industry, assume that consumers only want an agent who has the most listings in town, but the truth is that many look to the agent with a smaller number, assuming they’ll get more attention and have more time devoted to their listing. Consumers aren’t stupid and there is an inadvertent belief under agents’ breath that they are. Without being guided, the consumers we spoke with all deemed the anti-AgentMatch agents to be anti-consumer. Ouch.

Although we partner with realtor.com on a select number of events, they are not past scrutiny, so let me be clear – there are holes in the product, and the creators can blame the MLS, but the holes remain. Agents that specialize in pocket listings are out of luck, and brokerages that focus on new home builders’ listings (which sometimes don’t ever touch the MLS) are not accounted for. That’s a meaningful chunk of the industry.

Another hole, and a big huge fat one, is that there is currently no way to opt out of being featured – Graham tells us they would consider it if users requested it, but for now, agents cannot opt out. That probably should have been built in from day one and made easy for agents who object.

In addition to the holes, I have to jump in to say that this is not that big of a deal. It’s one website. It’s a simple tool in a buyer or seller’s massive toolbox. The few outraged agents remind me of real estate professionals who were wildly opposed to lockboxes going digital or the MLS going online. 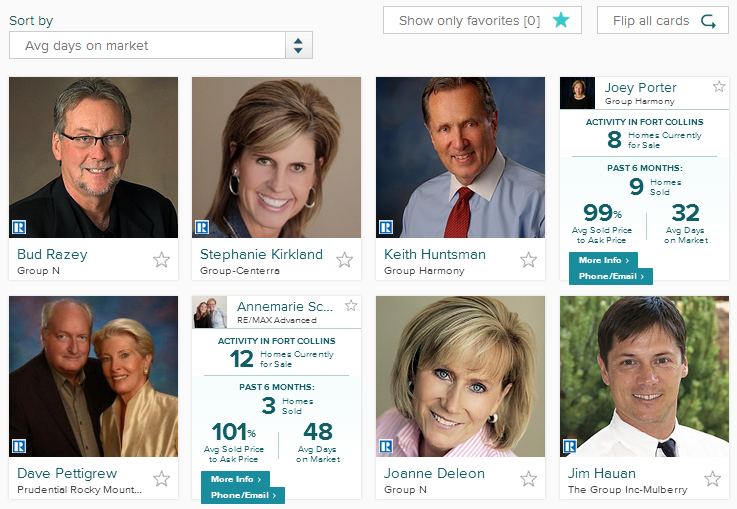 What the industry must do

The industry must be more consumer-driven and quit giving the opportunities to third party sites that don’t have industry affiliations. If real estate technology innovates at the pace that some of the naysayers prefer, the MLS would still be exclusively on paper. If the few loud objections overrule the potential national launch of this tool, it will eventually be mastered by a third party company that has no industry affiliation, no ramifications for not following the rules, and no requirement to follow the Code of Ethics.

While AgentMatch is actively listening, objections should be aired, but what is presently making the rounds is riddled with misinformation, and honestly, is actually anti-consumer. People want to research agents, and realtor.com has met them where they’re looking.

My fear is that the industry is going to wail about this and miss an opportunity to provide something meaningful to consumers, letting third parties find a way to make it happen and then charge agents to be featured or get leads, and the next generation of agents will then scream at realtor.com for not doing this in the first place. #backfire

In this article:agent match, agentmatch, Realtor.com

(Housing News) Consumers have endless market data, but finding information about Realtors is complicated - Realtor.com thinks they've untangled the mess and made it...

Realtor.com pulls the plug on internet portals, focus is on mobile