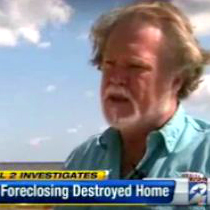 Bank of America is not new to wrongfully foreclosing on homes, but as seen in the video above, a Texas homeowner whose house was destroyed by Hurricane Ike in 2008 (yet continued to make his mortgage payments) recently discovered that Bank of America erroneously placed a homeowner’s policy on the non-existent property, mailed notices to his non-existent (read: destroyed by Ike) mailbox rather than the contact information he had provided them, and attempted to foreclose and auction the property.

“It wasn’t until about 20 calls that someone said, ‘We had a homeowner’s policy on your home that you reside in, and your monthly payments have gone up,’” he tells KPRC in Houston. “But they never notified me that my monthly payments had gone up.”

A Bank of America representative said, “There were a number of factors that contributed to the issues that resulted in the actions that we took on [this homeowner’s] mortgage and property. We continue to research the incidents. We have contacted [the homeowner] and we will work with him directly to address his concerns.”

The homeowner of the decimated home has a different take, “Bank of America is ruthless in their incompetency.”

As mentioned previously, Bank of America is not new to controversy like this. There are hundreds of cases if paperwork errors that have led to homes being foreclosed upon, and the bank (like other major banks) is in hot water for these and other issues. Below is a list of more reading about Bank of America’s troubles:

Consumers aren’t just taking it lying down. BoA is under investigation by all 50 states’ Attorneys General, HUD and being sued from every direction for their role in the housing crash, most notably for hundreds more misdeeds like those above.