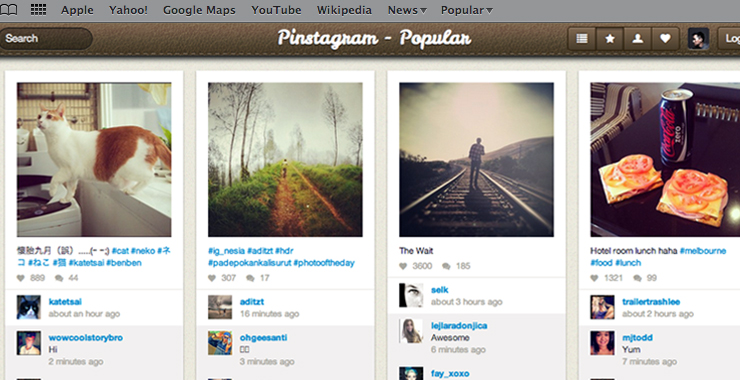 There are many mock sites and clones of visual bookmarking site, Pinterest.com, but most are poised for failure, as being a copy of an existing service without offering anything special is a recipe for a flop.

As companies come out of the woodwork to attach themselves to the Pinterest cash cow and put their own spin on it, a two-person design and development team in San Francisco may have struck gold with their launch of Pinstagram, the product of their “self-imposed hackathon” that combined Pinterest and Instagram, which they say started out with a joke, but quickly developed into a viable creation.

Visitors to Pinstagram sign into Instagram, and their default feed of friends’ photos, their photos, favorites, and popular pictures, are all pulled together into a Pinterest-esque interface, giving Instagram photos a more meaningful web presence through a nod to Pinterest’s now famous tile design, allowing likes, comments, or the ability to pin the photos directly to Pinterest.

Co-creator Pek Pongpaet said1, “I love using Instagram. The problem with Instagram however is their web experience is non-existent. I’ve been frustrated that the only way to consume Instagram is through my iPhone. Lately, Pinterest and Instagram have been getting a lot of press because of Instagram’s 1 billion dollar purchase by Facebook and Pinterest’s hypergrowth.”

Pongpaet added, “My cofounder Brandon and I were having a discussion on startup pitches, especially the ones that go “we’re an X for Y” and thought a hilarious VC pitch would be “we’re a Pinterest for Instagram”. The more I thought about it, the more I liked the idea. I liked Instagram, and this was a real need for me. There was nothing like it out there that I would use. So last weekend I decided I would make it a weekend project.” He says the site is a very simple Ruby and Sinatra app without a database, with a front end built on Twitter Bootstrap.

Pinstagram is unlike other clones in that it seeks to offer something special, something extra, and so after a weekend of hacking, the two made a Pinterest for Instagram, and given the wild popularity of the two, and the fact that Pinstagram enriches the experience of both the Pinterest community and the Instagram community, it has a great chance at actually succeeding despite being one of many companies inspired by Pinterest.