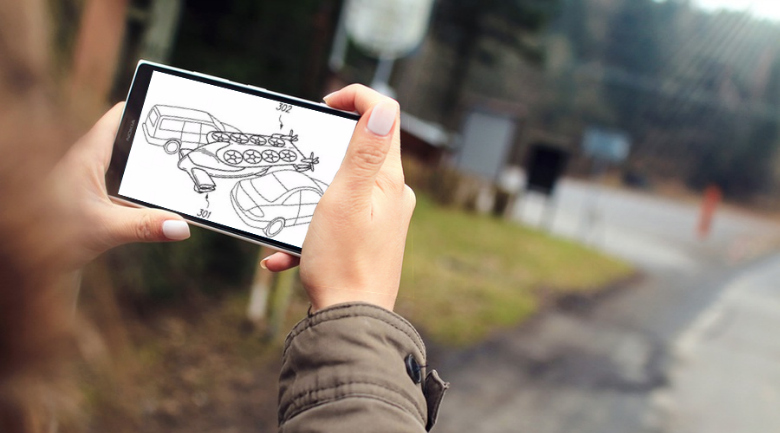 Seemingly out of nowhere

When I was a school kid in the 90’s, there was a lot of hubbub about the new millennium and the technological changes that would transform the world. I remember when cell phones became a thing. I remember when the Segway was supposed to revolutionize personal transportation. And I remember that everyone was waiting expectantly for a flying car.

Read also: Google patents “pedestrian glue” so you stick to a hood if hit

Well, we’re still waiting. But Silicon Valley insiders say we may be closer than ever.

Zee.Aero, launched in 2010, is a startup whose headquarters in Mountain View, California is right next to Google’s. The startup also leases a building at the Hollister Municipal Airport, popular amongst amateur pilots, and airport employees claim that Zee.Aero runs secret, after-hours test flights of its prototypes.

The U.S. Patent office shows the company filing for a patent on a small electric plane that can lift off and land vertically.

Press inquiries to the company were met with silence, and insiders report that Zee.Aero employees were given wallet-sized cards with instructions for evading journalists.

Zee.Aero is owned not by Google, but by its founder, Larry Page, who has spent millions from his personal fortune to fund the entire project – but he doesn’t want you to know it. Supposedly, Zee.Aero employees are sworn to secrecy and must call Page by a code name, Gus.

We’re only five to ten years away

Page also backs Kitty Hawk, another startup working on flying cars whose headquarters is located just half a mile from Zee.Aero’s. It seems that the two companies have a fiercely competitive relationship, often poaching each other’s team members. Some suspect that Page is backing both companies just to stimulate competition so that each team with work harder and faster towards the goal.

In fact, there are about a dozen companies working on flying car prototypes.

Joby Aviation hopes to present a prototype later this year; their all-electric design would allow a family of four to travel up to 100 miles on a full charge.

Said Mark Moore, an engineer at NASA, “Over the past five years, there have been these tremendous advances in the underlying technology. What appears in the next 5 to 10 years will be incredible.” He argues that, technologically, flying cars are even less complicated than the autonomous cars in the works by companies like Google.

Working out the kinks

One of the biggest hurdles is achieving a vertical take-off and landing (VTOL) that’s really what distinguishes a flying car from an airplane. There are also questions about how to power the vehicle, as well as many safety concerns.

Despite the challenges (and technologists screaming “don’t call it a flying car!“), with so many tech and aviation geniuses working towards the goal, we may be seeing flying cars take to the skies faster sooner rather than later.