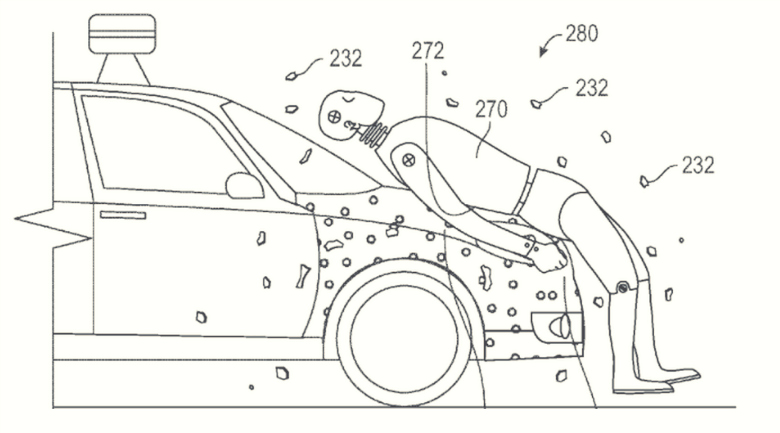 Whether you find it exciting or unnerving, self-driving cars have already hit the streets, and are on their way to becoming accepted by the general public. Proponents of autonomous vehicles argue that computer-programmed cars can actually learn to drive more safely than human beings. Nonetheless, a computer is not a human being, and it’s easy to imagine nightmare scenarios wherein the robo-car doesn’t realize that something has gone terribly, terribly wrong.

For example, what happens when an autonomous car hits an obstruction in the road, for example, a person? Will the car realize it has made an error, or will it simply keep knocking the poor pedestrian to the ground, or run them over?

So, what happens if the car does screw up?

Apparently Google, whose driverless vehicles have already had accidents with other cars and a city bus, has been tackling this problem, and has recently applied for a patent for “pedestrian glue.” Unlike a human driver, an autonomous vehicle may not make the correct decisions to reduce injury to a pedestrian who has been hit. For this obvious reason, Google felt it was important “to provide for the mitigation of injury to a pedestrian in a collision with [autonomous] vehicles.”

Yes, that phrase is “pedestrian glue”

The product is an adhesive coating layered onto the front and side panels of the vehicle, with a special covering layered on top. When the layers receive a strong impact, the protective coating will break to reveal a glue that will “adhere the colliding object to the adhesive layer during the initial impact.” That way, instead of falling under the tires, the pedestrian, instead, sticks to the front of the car.

The patent did not describe how the pedestrian is to become unstuck.

The patent was filed in November of 2014, however, like many patents, the technology may or may not be used in the final product.