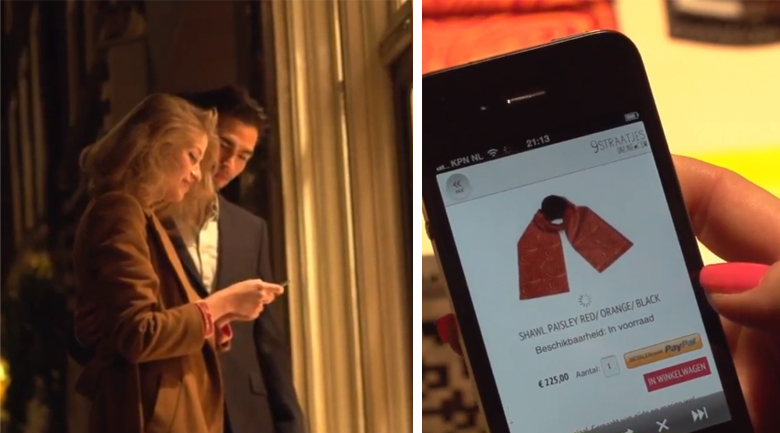 Announced this week, PayPal will be expanding a portion of its “Shop and Pay on the Go” services to international markets, testing the use of QR codes at brick-and-mortar stores in the Netherlands first. They’re referring to the new service as “window shopping 2.0,” allowing consumers to scan QR codes on shop windows, posters, billboards, etc. and instantly pay for selected items with their PayPal account. While this won’t work with big ticket items like cars, homes, etc., but for retailers, this could go a long way toward improving sales when offline stores are closed.

PayPal’s QR code service was launched in a Singapore subway station back in February, and now is being brought to Amsterdam’s popular shopping district, De 9 Streetjes (The Nine Streets) where consumers can use the iPhone PayPal app to scan QR codes at a variety of unique shops, restaurants, hotels, museums, and culture and art stores.

The QR code service is quite similar to the “Local” feature in the current PayPal mobile app, which provides a list of local retailers, restaurants, or servicers that are using the “PayPal Here” service, in which consumers can check into a store using the app, and pay for items directly from their phone instead of using cash or a physical credit card. Merchants can request to use PayPal Here point of sale technology in their store by filling out an application through PayPal.

John Donahoe, eBay, Inc. CEO, has said that the way consumers shop and pay in the next three years will change more than it has in the last 20. In The Netherlands, we see that prediction already coming true. The next wave will be a dramatic blurring of the lines between e-Commerce, m-Commerce and high street retail. Physical retailers will use internet technology to make consumers’ lives easier in several different ways: skipping the line, order remote and pick up in store, location based shopping assistance, or opt-in, user profile based service and incentives.

Eelco van Wijk, Country manager, the Netherlands & Belgium said, “While we are very proud of the QRoute model in De 9 Straatjes zone, this is not an end station. We see this as a first step into that convergent world for PayPal in The Netherlands. 2012 is a test and learn year for all of us at PayPal around the world. We are testing many new ways for customers to shop anywhere they want. With this project we’re learning more about how to maximize the fantastic real estate available in shop windows to help sales 24×7.”

In this article:Marketing, retail, Technology