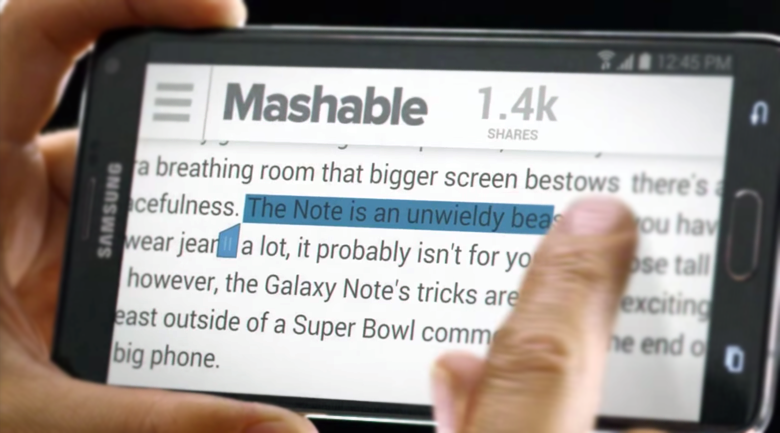 In a sassy new ad promoting the Note 4, Samsung proves that it isn’t quite done mocking Apples new groundbreaking innovations that sure look a lot like everything Samsung has already produced in years past. Samsung is again pointing out that they were dissed by tech writers and analysts as they launched new products, and claim that they invented the display genre, but they were right, as Apple is proving by following suit.

“The Next Big Thing is about more than just size,” states Samsung. “As the rest of the world catches up to the ‘not everyone wants a tiny screen’ thing, the Galaxy Note 4 is more productive, more innovative and more fun than ever.”

The ad, entitled, “Galaxy Note 4 – Then and Now” names names, calling out the bloggers like Mashable that mocked the Galaxy Note’s large screen, which is not the same dimensions as the upcoming iPhone 6 Plus.

Tell us what you think – is the iPhone 6 Plus imitating Samsung’s Galaxy Note? Agree or not, Samsung isn’t sitting back, letting their competitor reinvent a category they’ve already dominated.

In this article:apple, iphone 6, samsung