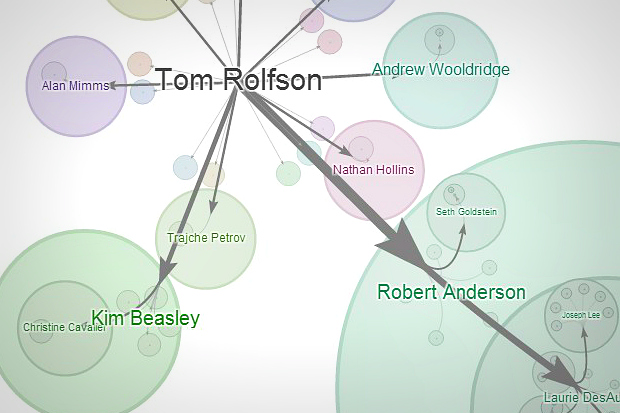 Although there are various third parties that show the path of a tweet, neither Twitter nor Facebook have an effective native method to show how status updates are shared, how they are spread, and what surrounding statistics like how many shares per hour are occurring. Google+ has introduced “Ripples” in order to help users better understand how their posts or anyone’s posts spread and treats shares like a living, breathing organism as charted in the video above.

“There’s something deeply satisfying about sharing on Google+, then watching the activity unfold,” said Vic Gundotra, Senior Vice President of Engineering. “Comments pour in, notifications light up, friends share with friends (who share with their friends), and in no time at all there’s an entire community around your post. We want to help people re-live those conversations—both to rekindle that initial excitement, and to learn how posts flow across the network. That’s why we’re launching Google+ Ripples: a visualization tool for public shares and comments.”

As seen in the video above, to find a Ripple, go to the small gray arrow in the top right of any update and on the drop down menu, select “View Ripples,” which allows you to see how the post has spread, who the top contributors and influencers of the conversation are, and what the pace of sharing is via two chart options. We learned by trial and error, however, that if no one has shared a particular post, “View Ripples” is not an option, so it may take some digging to find a Ripple (click here for an example of a widespread Ripple, and play with the zooming in, out and other features).

Tonight, Google+ has been flooded with hundreds of “let’s see how far this Ripple can go!” updates which are dominating/polluting streams, so that’s the only down side of the launch. Other than that, this is an insanely useful tool for users not only for monitoring their own activity but the spread of others’ which we anticipate will become one of the most popular Google+ features.

In this article:google, News, social networking