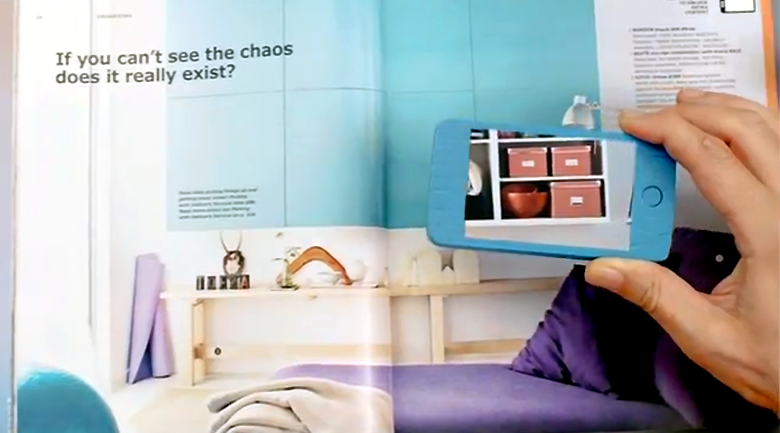 For many, many years, AGBeat has asserted that QR codes were a short term novelty that would be used by marketers until the world caught on to augmented reality (AR – what is AR?). QR codes look great and make any brand appear in touch with technology, but the truth is, all it is is a code that points your phone to a URL, and we have long said it is more effective to simply print a memorable URL that people can refer back to later. AR, on the other hand, adds functions to marketing that wouldn’t otherwise exist; it adds a layer of reality… it… augments reality (get it now?).

For its 2013 catalog teaser, IKEA has unveiled that they will be adopting augmented reality in their future catalogs to add a layer of information and interactivity through mobile. The company has been printing their catalog for 62 years now, and the IKEA catalog is a staple on many coffee tables in America, and with their 2013 catalog, they say they will add “smart ideas, fun stories and beautiful products” to the print mix.

Check it out for yourself

The IKEA Catalog App will be made available on July 31st for tablets and smartphones, and users simply download the app, turn it on, and scan select pages of the catalog. Scanning will unveil interactive experiences, additional photos, stories, other inspiration, and it will unlock films that cannot be seen without the app.

In an interview with CreativityOnline.com, Andreas Dahlqvist, Vice Chairman of ad agency McCann New York—the agency that reimagined the catalog said that the agency aspired to bring ‘IKEA creativity’ to the catalog itself.

“One of the catalog’s new main features is an accompanying (soon to launch) visual recognition app that will bring its pages, and the offerings within, to life in the form of inspirational videos, designer stories, ‘x-ray’ vision that peeks inside furniture, and more.”

In this article:augmented reality, Marketing, Technology