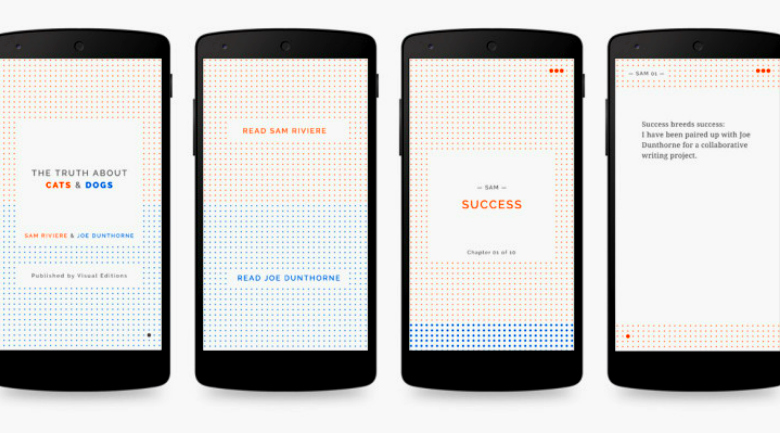 Interactive e-books that can NEVER be printed

Imagine an e-book so ingrained in the digital world, and simultaneously intangible and unusual, they’re calling it “un-printable.” Google’s Creative Lab has been working in tandem with Visual Editions, a London publishing house, to creative just such feats of experimental fiction.

Read also: Crush it in 2016 by reading these free marketing e-books

The series of books Creative Lab and Visual Edition is creating together is called Editions At Play, and are all meant to be un-printable. In order for a book to become an un-printable, it must first prove itself worthy. It must involve technology and concepts that paperbound books cannot handle.

So what are the stories about?

A perfect example is the book “Entrances and Exits” by Reif Larson. “Entrances and Exits” uses Google Maps to take the reader through an interactive love story. Doors and portals carry the reader through the book and inside houses you watch relationships and storylines develop. Google Creative Lab’s Tom Uglow explained that Google’s main job in the case of “Entrances and Exits” was to make sure that the technology did not overwhelm the storyline, but served as more of a framework instead. “It should be gently lifting the ideas or themes of the book like a score might lift the themes of a film,” he said. “It should emphasize what the author is talking about.”

Another title released in the Editions At Play series is “The Truth About Cats and Dogs,” by Sam Riviere and Joe Dunthorne. This strange little bit of new-age electronic literature is a combination of the authors’ poems, diaries and public correspondences, and reads as a conversation. Both books are live on browsers and can be read on a computer, but it’s recommended the reader use a mobile device for the best interactive experience.

The future of books

However, times aren’t going too far into the future. While Google Creative Lab is helping to create a series of un-printable digital books, Amazon is helping us step back in time. In Nov. of 2015 Amazon announced they would be opening a brick-and-mortar bookstore in Seattle. In Feb. 2016 it was accidentally leaked that they may be opening as many as 400 additional bookstores across the country for those craving paper and ink books.

For anyone interested in experiential reading, go browse the future un-printables ready for… un-print.

In this article:book, e-book, Editions at Play, google