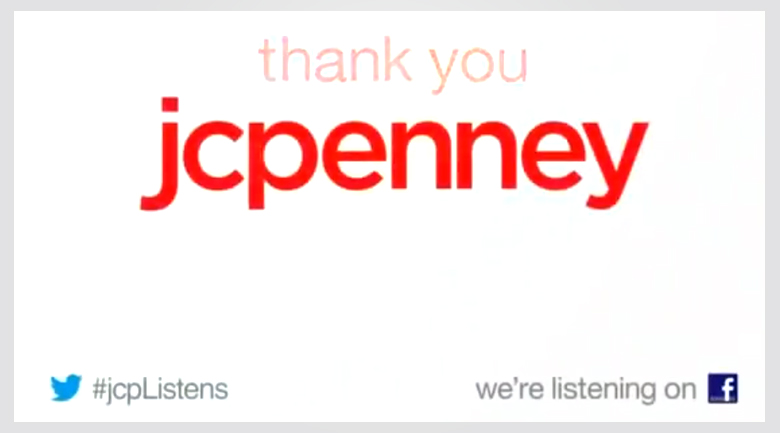 On May 13, 2013, JC Penney released a commercial on their official You-tube channel titled simply, “Thank you.” The 31 second commercial starts with “At JCPenney, we never stop being amazed by you…” The video, full of smiles and sunshine as well as a genuine message could go a long way with customers.

Add in several recent sales and a direct mail coupon campaign, and JC Penney is making the right moves in all areas. But after all of the recent upheaval, including the ousting of their CEO Ron Johnson and replacement with former CEO, Mike Ullman, will it be enough?

Read also: What JC Penney can do to rebuild their brand right now

Thank you and It’s No Secret

Their “Thank You” commercial came after having released a video last week titled “It’s No Secret.” The commercial states, “It’s no secret that JC Penney recently changed. Some changes you liked. Some changes you didn’t. But what matters with mistakes is what you learn. We learned a simple thing: to listen to you.” It would appear that not only did customers listen to this heartfelt appeal but they responded, as evidenced by JC Penney’s thank you video.

In addition, last week, JC Penney was able to secure credit in an obvious effort to weather the ongoing sales hemorrhaging after losing $427 million in the 4th quarter of 2012, a loss of 28%. The credit line of $1.75 billion from Goldman Sachs is a five year agreement and is in addition to the $850 million from JC Penney’s own $1.85 billion credit line giving JC Penney’s a $2.7 billion buffer.

The question still remains; will these steps be enough to soothe American consumers during these uncertain and challenging financial times?

JC Penney’s Facebook page certainly indicates the brand still has a loyal following. With over 3.6 million likes on the page and numerous comments from fans, it’s clear JC Penney maintains a healthy customer loyalty online. Jayme Crisafi posted on the public Facebook page, “Thank you JC Penney. I am a loyal customer who never left the flock. I love you no matter what you do!” JC Penney responded by saying, “Aww. Thanks Jayme. It’s loyal, vocal customers like you that we very much love and adore!” Obviously, there’s still plenty to love about JC Penney.