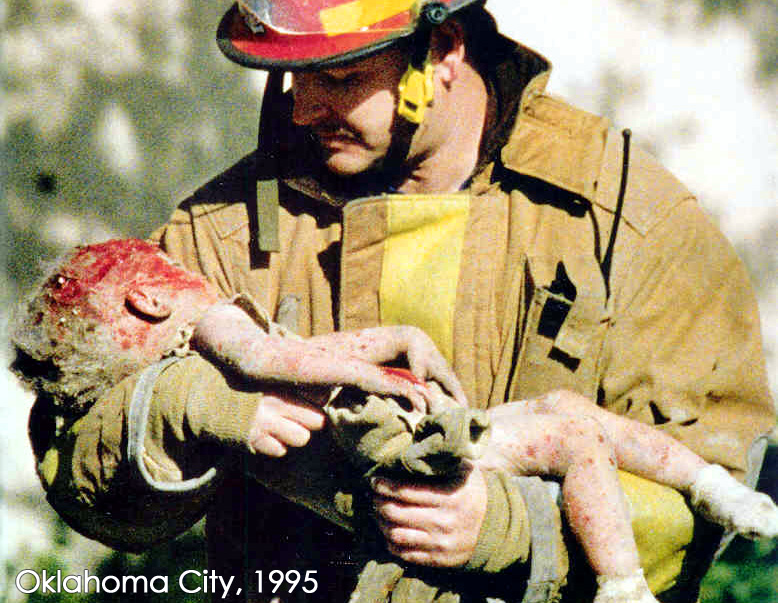 What you may not know or understand – one perspective

Every April, I begin a period of mourning, and as April 19th approaches, the further down I go emotionally, and sometimes, it’s a calendar that catches my eye and reminds me of why I am depressed. It’s the truth. While I am technically not a survivor of the Oklahoma City bombing on April 19, 1995, I felt the earth move under my feet, and had I still been working for the company I had been in that same year, I would have been parking on the top floor of the three story underground parking structure below the building around 9am. That feeling of why life changes or job changes happen ahead of a tragedy that save you, I leave to God to answer, but the guilt I’ve felt over the years has increased.

I didn’t have the fortune of working in a specific office there, my early life career actually put me in 99 percent of the offices within the building on a daily basis. Needless to say, I knew many, many people that worked for various agencies within the Alfred P. Murrah Federal Building.

At the time, the death toll was not something I would even consider or think about, rather, my job quickly became bringing the full weight of my current company to bear in delivering supplies to the crater, and the countless workers still trying to find survivors within the collapsed structure. Acting as a communications liaison between my company and the Red Cross, we were able to fulfill many of the immediate needs of the Red Cross, workers, volunteers, search dogs, and authorities – many heroes worked with us to facilitate the assistance, and I give all credit to those heroes along with so many other heroes that were doing the same in their own ways.

I was so amped and dove in head first so quickly, that looking back, it was obvious I was not going to allow the magnitude of the loss or the connection to possible victims to come near me – that lasted until the final delivery of supplies – a truckload of water delivered and stored at the Jerry Jones ministry warehouse around a week later in the middle of the night.

[pl_blockquote pull=”right” cite=”Live, Lightning Crashes”]
Oh now feel it, comin’
back again, like a rollin’
thunder chasing the wind.
Forces pullin’ from the
center of the earth
again, I can feel it.
[/pl_blockquote]It wasn’t until the next day in my office – I was listening to the radio, and the song Lightning Crashes by Live came on, mixed with the live coverage that happened immediately after the bombing.

It was quiet in my office, the phone wasn’t ringing, and I had no distractions. In the course of listening to maybe a minute of the song (not by personal choice, although I love the song) I began to weep, no, it was more like uncontrollable sobbing, and I couldn’t stop under my own power.

I sat down and reality hit me like a ton of bricks, and I wasn’t even there when the explosion came, and although I had visited the site a few times after the explosion, it was nothing compared to those who were actually there to witness the pancake collapse of the building, and the carnage that lay beneath. I didn’t have a scratch on my body, while so many were burned, crushed, and worse, so why was I crying?

I was just a kid then, and I had no idea what depression was, or what Post Traumatic Stress Disorder was, but as a young executive, I knew what I was feeling was the most powerful break I’d ever experienced – I could barely stand, and I shook.

Why am I telling this story now?

I watched 9/11 on television and like many, I witnessed in real time the second plane hit the building, but most of the aftermath was seen through smoke, and pictures, and I didn’t have the same personal connections in New York that I have with those in Boston this week, and while 9/11 has had an impact on me, both then and now, each attack has affected me differently based on how I personally connected to each.

The Patriot’s Day bombing comes in the same week as the 18th anniversary of the Oklahoma City bombing, so it was on my mind already when the first news reports of the Boston explosions broke. What I identify with is the feeling of confidence, purpose, and adrenaline in the eyes of witnesses and survivors, as well as the patriotism they’re feeling in the cities time of need – just like I did in 95.

In Boston, the first wave of victims are now stabilized, but the second wave is yet to come.

Many have not had enough time yet to swallow the deadly pills delivered by the blasts in Boston. Their professionalism, their love, their faith, and the strength they’ve summoned that they didn’t know they had is carrying them now – from first responders, accidental first responders, children, medical personnel, police officers, to every day average citizens and visitors with connections to the Boston Marathon. They have yet to begin to truly feel the power of the change that has just disrupted their lives.

Families that know anyone involved in this tragedy should watch their loved ones very closely, be there for them, be supportive, but most importantly, when the feeling of numbness begins to wear off, lead them to help. From my experience, it’s not something that any of my family could have coped with, rather, it was a complete and utter failure of my ability to control my own emotions and sadness, fear, and so many other problems I faced and still cope with today.

I cannot look at the list of dead, nor the list of survivors in Oklahoma City, nor can I bring myself to even visit the Memorial they’ve crafted in the hole in the Oklahoma skyline where the once Proud Alrefred P. Murrah Building stood. I’ve never even been back downtown – I just can’t. In fact, I moved a state away.

If families allow their loved ones to come to the breaking moment on their own, it’s better than picking at the wound, but at some point, when the “what now?” sets in, let it be the help they need, and their new focus to be on themselves.