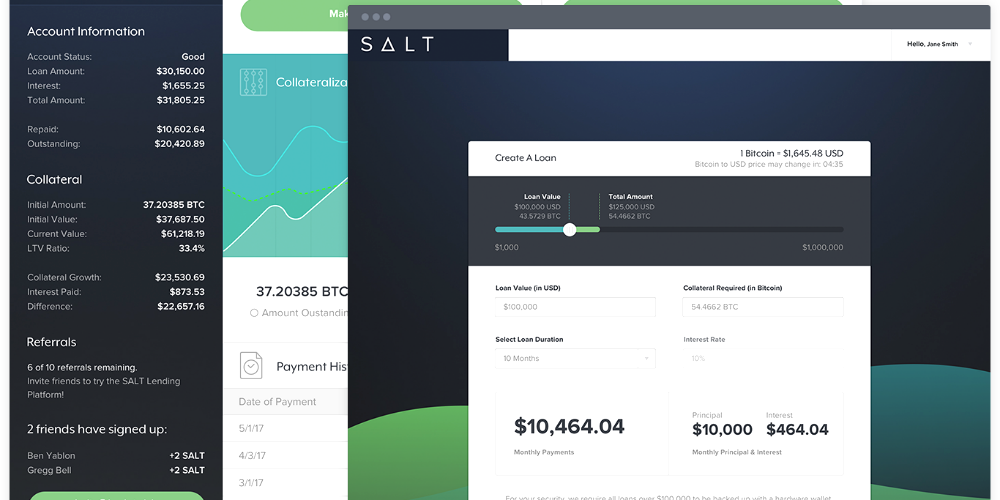 In my ongoing campaign to be your one-stop shop for millennial stereotypes, allow me to present a few of my generation’s favorite things: cryptocurrency and debt!

Read also: The rise of cryptocurrency (and what the heck it even is)

In short, here’s SALT. No relation. It stands for Secured Automated Lending Technology (mine stands for Sleepy Author Languorously Typing Expert Ruminations) and it’s a straight-up new way of lending money based on digital cryptocurrencies. Bitcoin and the like.

As the self-proclaimed in-house blockchain guy here at AG, I’m naturally intrigued, but seriously, if you’re interested in the making and moving of money, you should be too.

The TL;DR is this: traditionally, bitcoin or any other digital cryptocurrency has two big selling points.

First, SALT is peer-to-peer. No banks, no governments, just an encrypted record of who has what, and buyers and sellers determining how much they’re willing to buy and sell stuff for. Second, it’s secure.

Even cryptocurrency users who aren’t opposed to banks and governments on principle are concerned about the security of their financial information, and let’s be real: that’s pretty valid. Tech security, including financial security, is, to say the least, imperfect.

For a while now, however, there’s been a major flaw in the cryptocurrency model: for a lot of folks, it’s not real money. At present, most of the people who sell houses and sandwiches and salad spinners favor dead presidents over the mysteries of blockchain.

Banks in particular tend to assign roughly as much value to cryptocurrency as they do to my fat stacks of septims in Skyrim.

You cannot trade those for goods and services. I asked.

SALT foresees an opening, a potential third benefit to digital cryptocurrency. Given a pool of investors willing to lend, cryptocurrency goes beyond buying and selling to the magical land of credit.

Obviously, loans in cryptocurrency have always been an option: you can do whatever you want with the stuff as long as buyer and seller, or lessor and lessee, agree. That’s sort of the point.

What SALT is offering is one step beyond: liquid cash for crypto collateral. The difference is simple and huge: banks don’t recognize bitcoin and its kindred as valuable – SALT does.

That’s the new part, a new community of borrowers and lenders in both cryptocurrency and liquid cash, accepting cryptocurrency as collateral in exchange for “real” money or to guarantee other assets. No credit history, no legal limitations, because per the institutions that exist now, what is being accepted or disbursed is worthless.

This could be huge

That’s sort of huge. The word “disruptive” gets thrown around lots these days. I should know. Frankly, it’s starting to mean “pay us to make this cheaper and worse.” SALT, if it works, and if people buy in, means more. It constitutes a new way of lending people money, based on a kind of money that didn’t exist ten years ago.

Netflix bought into the comics world and the potential is endless