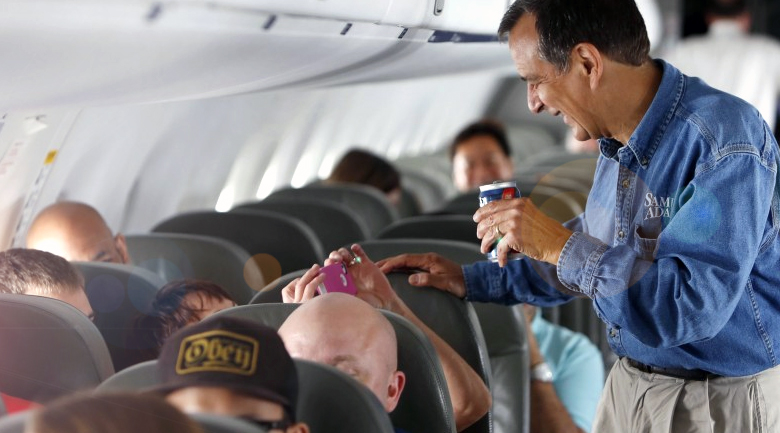 Sam Adams to be available on Jet Blue flights

You can rest easy; Sam Adams is airborne once again, as two of America’s favorite brands team up to make airline passengers happy as the once bottle-only company created a newly canned beer that is now available on JetBlue flights nationwide. Samuel Adams founder and Chairman, Jim Koch, unveiled the “Sam Can” in May and tells just what it took to allow the largest craft brewer to lighten up its stance that beer was best served in a glass bottle.

“Cans have gotten quite good today. (Ours) has a unique shape and a different lid, which means you get noticeably more flavor. It’s not huge. I would call it a slight but noticeable difference, but it was an improvement over the standard beer can.” The Boston Beer Company spent 1 million dollars over a two year span to build a better beer can.

Canned beer sales on the rise

According to the Beer institute, canned beer made up 53 percent of the beer sales just last year, versus the 48 percent in 2006. In 2008, fewer than 50 craft brewers canned their beers; whereas in 2012 CraftCans.com reports a 524 percent increase bringing that total to 262.

Cans are beneficial for many reasons, especially on an airline where space and weight play a large factor, as they are cheaper, lighter, and store more easily.

JetBlue and Sam Adams, sittin’ in a tree

Koch says that JetBlue has been very innovative in upgrading the customer experience, and was enthusiastic about bringing the Sam Can to their passengers. “When you have a partner like that, you know it’s going to last.”

J.D. Power and Associates once again awarded JetBlue highest honors in airline customer satisfaction among low-cost carriers in their 2013 North America Airline Satisfaction Study, an award the brand has won every year since 2006.

I’ll drink to that.