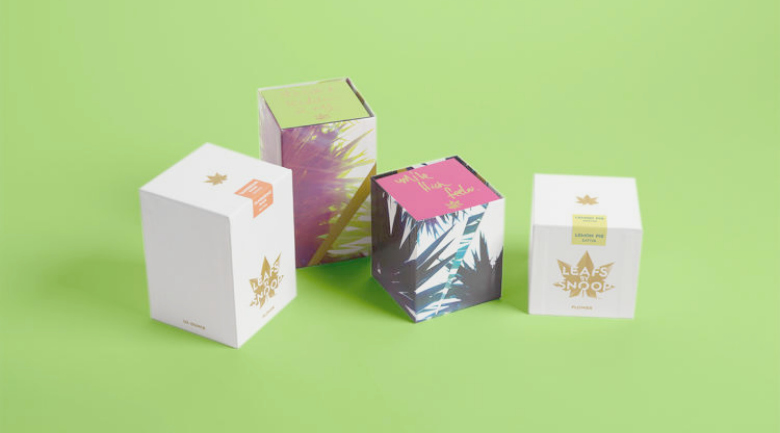 In the 1999 song “The Next Episode” by Snoop Dogg, the concluding lyrics urge the listener to “smoke weed everyday”. Now, Snoop is putting his money where his mouth is by creating a line of cannabis-based products that will be sold, as legalized marijuana becomes one of the fastest growing industries in the United States.

The rapper has never hidden his love for marijuana and now wants to share that love with others. His line of pot-based products is titled “Leafs by Snoop” and offers custom flavors of buds, concentrates, and edibles.

Snoop reached out to Pentagram’s Emily Oberman to design the packaging for “Leafs”. Oberman, a designer for The Tonight Show Starring Jimmy Fallon and Saturday Night Live, wanted to stray away from what one would normally picture as packaging, or décor, for such a product.

“We wanted it to appeal to a broader spectrum of human,” Oberman says. “[Marijuana] is a field in which Snoop is a true connoisseur, and with Leafs, he saw an opportunity that was not fake, to create a business that genuinely comes from who he is and what he likes.”

What was developed was a simple, minimalist set of boxes. On the front of each is a gold leaf with the words “Leafs by Snoop” written sharply in white text. Each box has a colored label describing the product, but it does not distract from the simplicity.

The boxes themselves almost resemble something of high-end packaging used for perfume cologne. Some boxes are more boldly decorated but never give the idea of something one would associate with marijuana.

The design of the packaging is now known as “California cool” which is a perfect description of the aesthetic that the product packaging displays. In order to meet regulations, the product had to be packaged in a child-safe manner – like a bottle of prescription medication.

It seems as though the ultimate goal was “it’s what’s inside that counts”.

The products come with an equally simple instruction card, which also has the gold leaf emblem. The instructions are listed as: 1. Grind it, 2. Roll it, 3. Light it.

In this article:Leafs by Snoop, marijuana, Snoop Dogg

This bill could make marijuana legal on the federal level

(BUSINESS NEWS) A new bill proposed could have a pretty hefty impact on marijuana usage and cannabusiness.