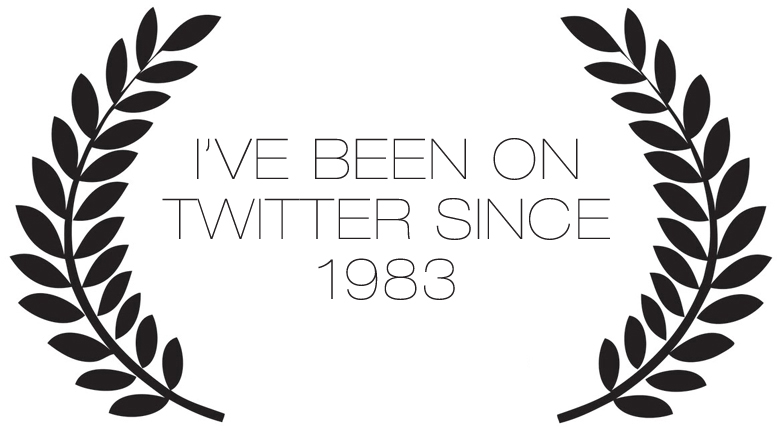 At a social media event last night, a mixture of people new to the industry sat alongside industry insiders who pioneered the space, and the discussion was lively. I came to a halt, however, when an attendee made a reference to having been on Twitter many years ago, making it sound a lot like they somehow invented the space. It got me to thinking… how many other people are resting on their laurels?

The graphic I created above is obviously a mockery of those who exaggerate their role in the early days of social media, but rest on their laurels of having been an early adopter. Social media experts are about as common as sales people – there’s no shortage of someone who will take your money and show you how to sign up for Twitter, especially those who were there in the early days.

The rise of the social media expert coincided with massive unemployment, so while many legitimate experts were born, there were also thousands of unemployed people poking around the internet that discovered Twitter and Facebook and saw people there figuring out how to use it as a marketing tool, so light bulbs went off and the guru era ensued. Great.

Fast forward to today, and you have people that haven’t accomplished a whole hell of a lot since they signed up for (sorry, I mean pioneered) Twitter. Sure, we (@BennRosales and I) were some of the first people on Twitter, in fact, I looked it up today and my personal account was created five years, seven months, and two days ago, making my account older than 99.8 percent of all Twitter accounts, according to Twopcharts.

But I am an established pioneer, I swear

So shouldn’t I be telling people that every time I encounter someone to really demonstrate my prowess, to prove what an expert I am, and to instill in minds of many that my very presence on Twitter so early means that I am an established pioneer who knows more than anyone else who has figured out how to sign up for Twitter since?

No. I shouldn’t. Not only because it’s a douche move, but because resting on laurels is a lazy move, and an ignorant one, because let’s be honest, just because someone was on Twitter in 1983 (I kid), does not mean they know anything about marketing or social media. You’ve signed up for Twitter and know how to tweet – is the actual act really that difficult? Nope.

Although I am confident that Benn and I did play a role in helping shape the very culture of Twitter and helped businesses to understand the tools, we didn’t stop there – in fact, there are thousands of articles on this very website that catalog our continued involvement in and shaping of the community, we’ve hosted dozens of events on the topic over the years, and we’ve even won a few trophies along the way.

When someone proclaims how long they’ve been on Twitter as if they invented it, my first thought is, “okay, great, but what have you done since?” Most people that puff their chest about having been on the internet in 2007 don’t have much to brag about since, because news outlets have stopped calling to interview them as the glorious marvels of early adoption. Most of them peaked around 2008.

Next time someone rolls their eyes at social media information and proclaim they’ve been on Twitter since forever, ask yourself what they’ve done since. Many of these people are the same nerds that like to casually (and frequently) mention in conversation that they were on the football team in high school, and will probably slip in a few of their stats even though you were talking about something completely unrelated. That’s exactly what they’re doing when they assert that the age of their Twitter account implies they’re superior social media beings. What have you done since high school or since you signed up for Twitter, bro? In most cases, probably not much.