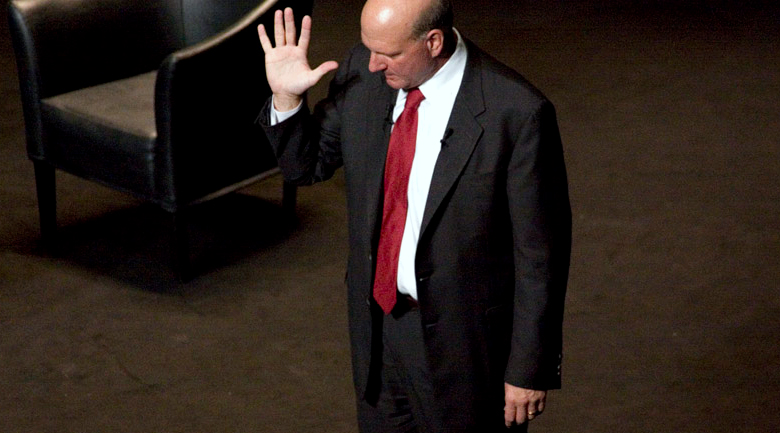 As current CEO Steve Ballmer says his 12 month long goodbye to Microsoft, there are a few things he could attend to before he departs. The flaming of Microsofts Surface Tablet, and the PRO version, as well as the Windows 8 operating system, and even the new XBox One, lead people to believe that Microsoft is in turmoil, and Bing hasn’t really made any inroads either.

I, for one, am a Microsoft fan. I’m not an Apple hater, or a Google hater, I just happen to trust the family of products produced by the company I’ve known since the mid 90s. I find more issues with the third party products than Microsoft itself, their failure to stand behind known issues for the long term, really makes the brand in general look badly, be it HP, DELL, or any other product producer using the Microsoft brand and software to push their products.

What’s happened over the past 10 years at Microsoft is that the company has become complacent. It’s product outreach handled by (again) a third party public relations firm is abysmal at best (lovely people, though). No one knows this company anymore, and it’s operating system is used globally.

There has been way to much reliance on that dominance, making the company quiet and out of touch with it’s fans, those that actually love the new products Microsoft has brought to market in recent months and years.

Instead, the focus has been on attempting to convince Apple fanatics, or Microsoft haters in general, that they are wrong about Microsoft. What a strange approach when a tech blog calls Windows 8 the death of Microsoft’s operating system dominance, the public relations reaction is either do nothing, or attempt to correct the tech writers thinking. The image of Ballmer above is a figurative nod to this mentality of pushing away fans.

The upside for Microsoft

It’s my opinion that Microsoft has shown a lot of creativity and youth in it’s brand and thinking, but has failed to understand that it has more fans than critics. So what if the iPhone kicks ass in sales in every corner of the globe? The general consensus is fast becoming that the phone looks outdated and is rather boring in comparison to the growing market of options. Why is this not an opportunity?

The opportunity Microsoft has in the marketplace is it’s fan base. Not many people admitted to liking Michael Jackson’s Thriller album, yet, the album flew off shelves faster than any album to date. Why is this? Because it just wasn’t cool? I’m not sure of the psychology of this type of denial, but the reality was in the sales of the album, and the accompanying sold out tour that followed around the world.

Stop barking up the wrong tree

Fans matter, whether those fans want to admit they’re loyal or not. If you continue to kiss the ass of the known outspoken haters of your product rather than working with those who are actually fans and see value in you, you’ll continue to suffer. Business isn’t high school, nor is consumer loyalty. It may be cool to have an iPhone, but the what have they done lately is fast approaching, faster than Apple likely realizes.

So why not capture loyal fans, outlets, blogs, and organizations that want to support the Microsoft brand – not because it’s financially advantageous, but because they’re betting on you, Microsoft, in the long run. It’s really that simple.

We’ve met the public relations team, we’ve told them how we feel, how we feel they’re seen, shared focus and study materials on brand comparisons, and still, Microsoft still seems to feel the need to take the high school route of obsessing over and chasing the girl who will never love them. Apple fanatics are Apple fanatics – they’re just so blinded by that fact that they can’t see their own fanatics.

The outgoing CEO has the power to change this flaw in the Microsoft ethos in less than 12 months, but will he?

Embrace your own fanatics with the true narrative – they’re your best weapon in the battle for market share.

In this article:leadership, microsoft, steve ballmer