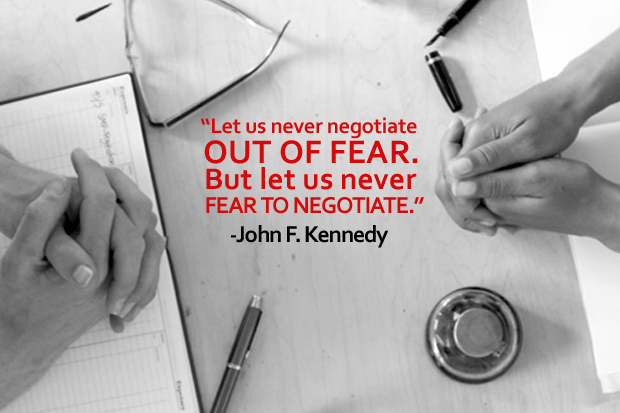 The art of negotiation

One major part of a successful business is negotiation. As such, the art of negotiating is an essential skill of the modern business pro. But negotiating isn’t always so easy, as it is generally a trait that has to be developed rather than an inherited trait. Whether you are about to meet at the negotiation table or you just want to be prepared for future events, here are 19 inspirational quotes all about professional negotiation.

“During a negotiation, it would be wise not to take anything personally. If you leave personalities out of it, you will be able to see opportunities more objectively.” – Brian Koslow

“The most difficult thing in any negotiation, almost, is making sure that you strip it of the emotion and deal with the facts.” – Howard Baker

“This is a classic negotiation technique. It’s a gentle, soft indication of your disapproval and a great way to keep negotiating. Count to 10. By then, the other person usually will start talking and may very well make a higher offer.” – Bill Coleman

“Let us never negotiate out of fear. But let us never fear to negotiate.” – John F. Kennedy

“Don’t bargain yourself down before you get to the table.” – Carol Frohlinger

Secret of a diplomat

“He who has learned to disagree without being disagreeable has discovered the most valuable secret of a diplomat.” – Robert Estabrook

“You must never try to make all the money that’s in a deal. Let the other fellow make some money too, because if you have a reputation for always making all the money, you won’t have many deals.” – J. Paul Getty

Meet me half way

“The most important trip you may take in life is meeting people half way.” – Henry Boyle

“The worst thing you can say is ‘I want $X for this job,’ leaving no opening for negotiation by the other side. Better language is ‘I hope to earn between $X and $X.’ That gives the other party more flexibility.” – Bill Coleman

“If you come to a negotiation table saying you have the final truth, that you know nothing but the truth and that is final, you will get nothing.” – Harri Holkeri

“If you are planning on doing business with someone again, don’t be too tough in the negotiations. If you’re going to skin a cat, don’t keep it as a house cat.” – Marvin Levin

The power of silence

“Never forget the power of silence, that massively disconcerting pause which goes on and on and may last induce an opponent to babble and backtrack nervously.” – Lance Morrow

“A negotiator should observe everything. You must be part Sherlock Holmes, part Sigmund Freud.” – Victor Kiam

“Diplomacy is the art of letting someone else have your way.” – Sir David Frost

“Anger can be an effective negotiating tool, but only as a calculated act, never as a reaction.” – Mark McCormack

Knowing who will win

“It’s a well-known proposition that you know who’s going to win a negotiation; it’s he who pauses the longest.” – Robert Court

“Place a higher priority on discovering what a win looks like for the other person.” – Harvey Robbins

Negotiation is about knowing what you want, going after it, and respecting the other person in the process. Remember that the whole point of negotiating is compromise. This means that you need to look out for yourself, but also be willing to budge in order to satisfy both parties. As mentioned in some of the quotes above, negotiating is to build professional relationships rather than burning bridges on your way out of the conference room.

What entrepreneurs can expect during due diligence

Business mogul says offices should not have doors

What to consider before you pivot your business model

(BUSINESS ENTREPRENEUR) Many businesses have had to pivot during the global pandemic but maybe yours isn’t one of them. Consider these questions first! 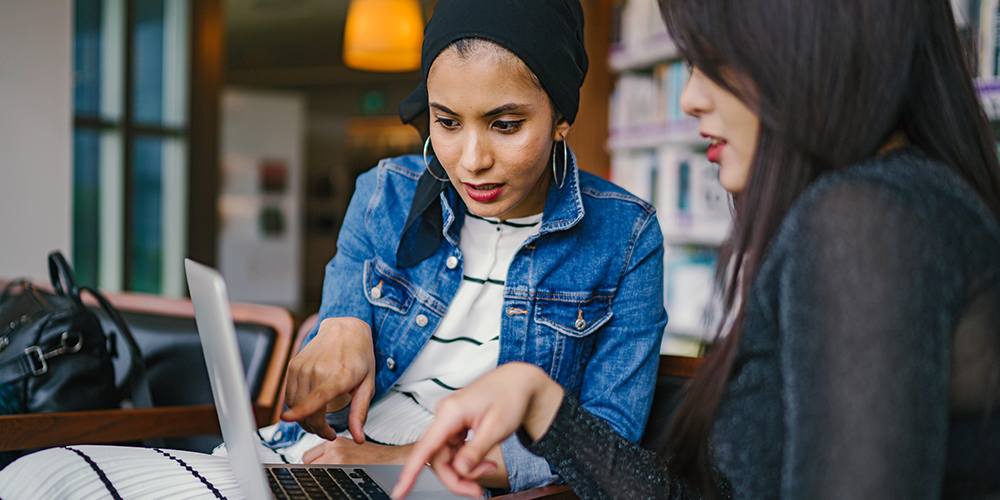 When Ross asked Rachel and Chandler (Friends TV show 1994-2004) to move a couch, many of us will never forget his voice inflection and how many times he yelled “PIVOT”! It’s actually a really funny scene and if you’ve never seen it, it might be worth 3.5 minutes of your time. Ross had the best of intentions by starting with a sketch and enlisting help from friends but even that ends up in hilarity as getting his couch in to his apartment doesn’t work and he ends up being offered $4 when he tries to return it (stay for the end of the clip).

The best plans and intentions for your business are often met with what the market and customers demand, where technology grows, and where your ROI is the best. You often know that your original plans will grow and evolve, even in uncertainty and now… a global pandemic.

Many entrepreneurs and small businesses have had to lean on technology to add virtual services (or expand their offerings) to meet our current norm where people are just not out and about like they used to be. Some have seen this work well and others have had to completely re-design their offerings to maintain safe and socially distanced considerations.

The thing is, businesses that have pivoted are being highlighted. But it is also worth looking at what has worked for some businesses that didn’t have to completely shift their strategies in 2020. It is likely that they had to adapt but maybe not a ridiculous Ross-type “pivot” that resulted in a complete failure of the mission.

Harvard Business Review (HBR) shared an incredible article, “You Don’t Have to Pivot in a Crisis” with great insights about what to consider if you think you need to make changes or if you want reassurance you are still on the right track.

“The lesson here is that when a crisis hits, it pays to resist knee-jerk reactions on how to handle external shocks and ask what is going to work best for your company, based on the particular realities of its business. Ignoring the playbook of rapid cuts plus strategic pivoting can be the smart move… However, staying the course doesn’t mean inaction.”

Here are three thought starters you may want to consider for your business:

These are three simple things but could help point you in the right direction of where to focus your time and energy – at least for now. You may not need a complete re-design or to take a new road, it might be some tweaks and adjustments to hang on to what you’ve worked so hard to build.

(BUSINESS ENTREPRENEUR) What are the best software products for your up-and-coming company? Use these questions to decide which kind is best for you.

The past year and a half has been challenging, not just economically but politically, and socially as well. While it would be nice to think that things are looking up, in reality, the problems never end. Taking a minimalist approach to your business, AKA keeping it lean, can help you weather the future to be more successful.