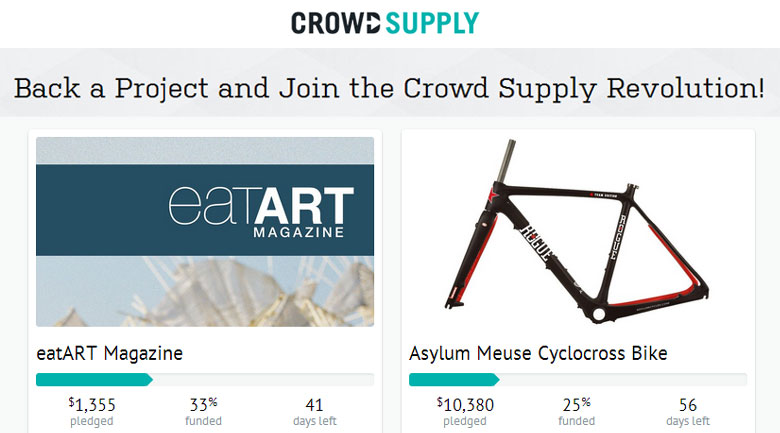 Crowd Supply: the next generation of crowdfunding

Kickstarter launched as the leader in the crowdfunding sector which is now growing to include various spins on the concept. Since its inception, Kickstarter has garnered the most attention and press, and is a winner for media projects like art installations, music projects, and other fundraising efforts, but in 2012 when the Pebble smartwatch put up a page on Kickstarter requesting funding and became the most funded project in the site’s history, raising over $10 million, problems arose. The smartwatch was a winner because it was so popular, but the company was so overwhelmed and surprised that they were not prepared for such a windfall.

Kickstarter is a truly helpful tool for fundraising, but beyond that, innovators are on their own to meet demand. Kickstarter wrote in 2012 an explanatory piece entitled, “Kickstarter is not a store,” meaning they do not play a role in getting any products to market, nor insuring that they make it to market, they are strictly a fundraising tool.

But what of the companies that need more than fundraising? What happens when product development is adversely affected? Enter Crowd Supply, the next generation of crowdfunding that goes so far beyond just fundraising, but puts a twist on the entire process by adding fulfillment, warehousing, progress tracking, and more.

Crowd Supply IS a store

Crowd Supply answers to some of the shortcomings of any crowdfunding site for products that don’t offer store functions, from how the project pages function to managing product fulfillment, tracking, returns, and more.

One of the problems with crowdfunding sites is that the funding period lasts for a specific period, usually around 60 days, and fundraisers cannot access the funds before that period is up, even if they hit their fundraising minimum amount. Kickstarter, for example, does not release funds to be used for the product until 20 days after the fundraising date passes.

Crowd Supply’s President, Lou Doctor tells AGBeat that they answered to this conundrum by funding the project as soon as their fundraising goal is met so that they can begin production. If more funds are raised, they can scale to increase production, appealing to product developers who want nothing more than to get started.

Brands get the SEO juice and actual preorder pages

Another way Crowd Supply has put the crowdfunding process on steroids is by giving complete control to the fundraiser. Kickstarter is a massive SEO powerhouse and can give a brand a major boost, but because of their size and power, they inadvertently snag all of the SEO juice for the young brand’s name, as fundraisers cannot access their project page after the fundraising date passes to direct potential buyers to an order page.

Crowd Supply offers more than just a fundraising page, as each page that meets their goals is automatically turned into a preorder page, allowing brands to offer target delivery dates for batches of pledges so that no one is disappointed by endless delays (a bad start for any brand, we would add) as has happened with popular projects on other crowdfunding sites.

This setup is unique because most payment processors don’t want consumers to be at risk, so Crowd Supply mitigates consumer risk by allowing preorders to be cancelled for store credit, so funds are still collected.

Adding fulfillment and warehouses to the mix

The founders come from the e-commerce world and their existing companies will deliver $50 million in sales in 2013 alone, so what they’ve done is take the backbone of product development and added it as a layer to strengthen the crowdfunding platform. Genius.

They already have fulfillment for creators, warehouses, negotiated UPS rates, and can handle getting tracking information instantly to customers, handle return logs, etc. Most crowdfunding projects have to hire siblings and temps to slap stickers on packages in the inventor’s basement, with no real accountability to the consumer.

The company looks at their offering as ideal for serial project creators and assert that they are poised to have long term relationships rather than a simple one time event as the current crowdfunding world revolves around. We like to think of Crowd Supply as crowdfunding on steroids, built from the ground up for grownups.