New home under construction in Asheville, photo by Brock Builders.

New home under construction in Asheville, photo by Brock Builders.

Remodeling at an all time high

According to BuildFax’s August Remodeling Index, remodeling activity hit an all time high (since recording began in 2004) and based on permit data, rising nearly ten percent in the last year. Over 3.3 million residential remodeling projects are on track to be permitted in 2011, up from 3.1 million in 2010. Remodeling activity has risen every month for nearly the last two years straight.

“As mortgage rates hit record lows, it is apparent that millions of Americans are refinancing their homes and using some of their new monthly savings to reinvest in their homes with remodeling projects,” said Joe Emison, Vice President of Research and Development at BuildFax. “With remodeling activity growing at an estimated 9.5 percent in 2011 compared to 2010, this is one segment of the economy that is showing continued strength, even as other sectors struggle.”

According to National Mortgage Professional, BuildFax’s Index “is the only source directly reporting residential remodeling activity across the nation with monthly information derived through related building permit activity filed with local building departments across the country. This monthly report provides month-over-month and year-over-year comparisons on trends in remodeling activity for the entire United States, as well as for the four major regions of the country: Northeast, south, midwest and west.”

The Index reveals that in August, the west region rose 33.6 percent, the midwest jumped 11 percent and the south rose 8.2 percent. Declines were seen in the northeast of 0.8 percent and in the northeast, dropping 3.9 percent and although the report doesn’t seem to track why regions are performing so differently, but with Hurricane Irene hitting the east coast and droughts in the south, the environment hasn’t been friendly in all areas to remodeling, as homeowners are performing repairs. The scene appears to be remodel-friendly, however, and with two years of increases, homeowners are making the choice to stay put for longer. 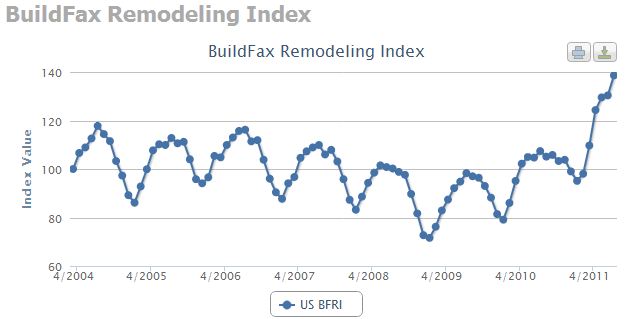