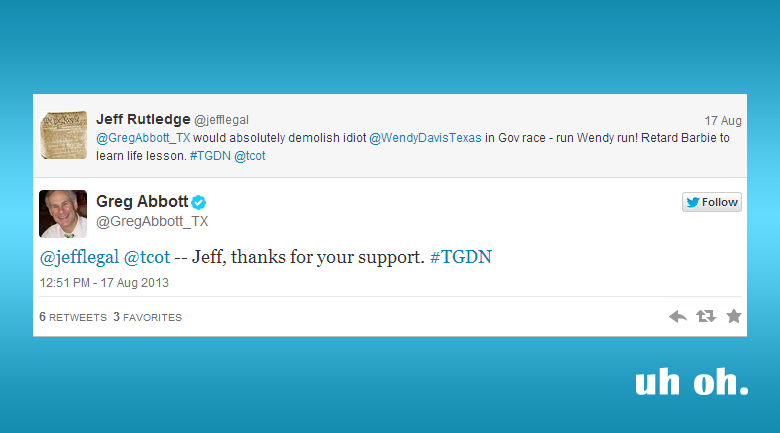 Over the weekend, the Texas Attorney General Greg Abbott – who is now running for Governor – got himself in a bit of a mess on social media that should serve as a lesson beyond politics to all business owners. Of course, politics often brings out greater passions in people from the beginning, but it is not difficult to recall times businesses have gotten themselves into similar trouble. And this was such avoidable trouble.

It started when a lawyer named Jeff Rutledge who tweets under the handle “@jefflegal” mentioned Attorney General Abbott in a tweet opining that Abbott will beat Senator Wendy Davis if she runs for Governor because she is an “idiot” and “retard Barbie.” That may not be the most inspired or adult way to express his support for Abbott, but given that the only people who likely saw the tweet were Jeff’s connections who probably agree with his perspective, nothing more might have come of the tweet.

But then the Attorney General greatly magnified Rutledge’s disparaging use of words that many understandably find offensive by replying, “Jeff, thanks for your support.”

Beautiful day in Texas…lots of love around me & teaching libs lessons of tolerance…too bad they can't learn. #libtards #TGDN #tcot

Four 'journalists' reach out for comment on "Retard Barbie" tweet – is this even a story? Journalism is dead. #TGDN #tcot

Dear Libs – We have harassment laws in Texas – bring it on and you will hear from law enforcement…promise! #TGDN #tcot

At first, it was easy to assume that the AGs tweet was simply an accidental auto-response, but the personalization of the tweet by using Rutledge’s first name in the response is beyond the capability of most auto-responders. Then, it was easy to assume that Abbott’s second string, weekend social media intern just wasn’t paying much attention and made the foolish reply. Later, though, Abbott’s campaign insisted that the Attorney General handles this particular account himself.

While the social media intern would likely have been removed from the position, what are the consequences for Abbott?

Running your business, you can assume that there are several perspective on your service or product: There are fans who will start out giving you support and the benefit of the doubt when you mess up; there detractors of your product or service who will make the worst of anything you do; and then there are those with no formed opinion about you or what you do.

Abbot urges people to stay positive, but is damage done?

Abbott’s supporters and opponents will behave predictably, as will your customers and detractors, but what of all of those you have yet to reach? Would you want this type of situation to be the first impression you made on a potential customer? If you look at the Twitter feed regarding this situation, most of the people engaged are already supporters or opponents, but some are simply offended by the AG’s implicit support of the use of the offensive language by Mr. Rutledge.

Understand that while social media can be very beneficial to your company, at any moment someone can jefflegal you, and you should know how to handle it. The best bet in this type of situation is either not to engage or to make clear that you do not condone the use of demeaning language. But beyond that, you should have a business communications plan in place to guide you and your employee’s behavior when situations arise that could ultimately harm your company.