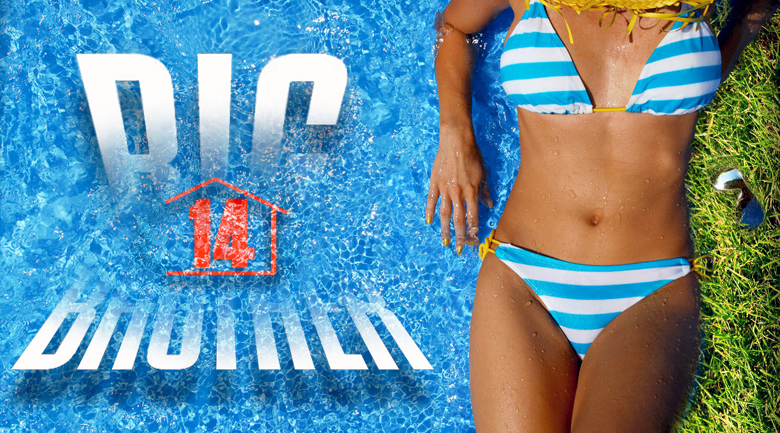 This season on Big Brother

Big Brother is a popular reality television show where a group of people live together in a house filled with cameras, isolated from the outside world, continuously filmed through their entire visit, and each week, the cast competes for prizes, and players are voted off as they all race to be the single player left standing to win $500,000.

Let’s be frank, the show is amazing. To be completely biased, I believe it is the only thing good about summer television, and I love it so much that we pay for Showtime channels just so we can see the “After Dark” live feed at night. In other words, I’m a fanatic, so let that color the following opinions as you will.

This year, the show added “Big Brother Connect,” which aggregates live social streams which is supposed to enrich viewers’ experiences by adding a community of other Big Brother fans, and allowing fans to see their tweets live during Thursday night broadcasts. Genius. Interactivity at its finest.

The idea is great, but the execution is terrible. The design works, the aesthetics are fine, the function is great, the page loads quickly, and everything is in order, but there is something peculiar about the tweets being featured.

Take a look at a screenshot from the day of the premier, and the next from this morning, and tell me what is odd to you: 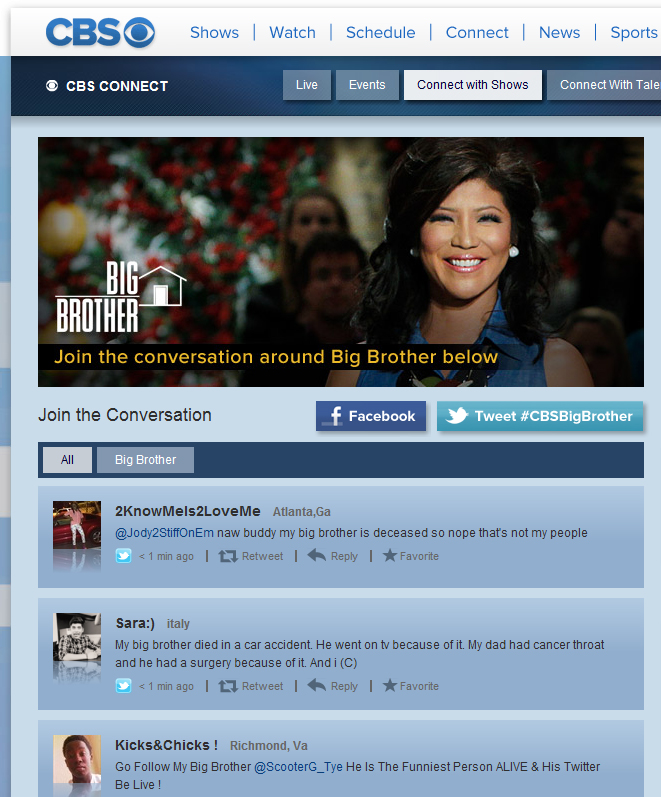 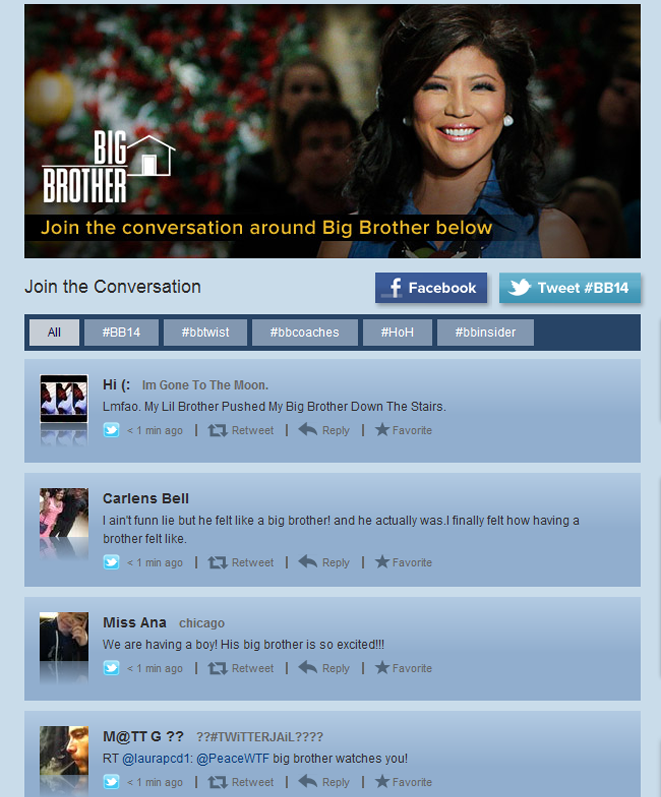 The show has been hailed for embracing social media, but wait, what’s that? Did you read those tweets closely? In the first screenshot, the first two tweets are about deceased siblings, and the third was a sibling asking you to follow his brother on Twitter. Another random screenshot, the second, highlights sibling violence, then some horribly spelled sentiment about someone feeling like a brother, a pregnancy announcement, then something about big brother watching you which does not appear to be related to the reality series.

What do these tweets all have in common?

What do these seven tweets have in common that have been aggregated automatically as part of the “Big Brother Connect” campaign to show how the show has their arms wrapped around social media like a sexy, warm hug? What they all have in common is that they have absolutely nothing to do with the actual show, yet next to host Julie Chen’s face, it says clearly that this is the “conversation around Big Brother.” Nope.

Social stream aggregation is not new, it’s been around for years, so with a company with a budget of this size, it is shocking that CBS would screw up their social campaign so badly, and inadvertently highlight tweets about dead siblings or pushing siblings down the stairs. I know you’re looking more closely now, saying, “wait, just click around,” and you’re right – if someone were to look much more closely (rather than skim, which social media users are wont to do), they would see that this stream is the “All” stream, which has aggregated any mention of “big brother” as a term, whereas next to it, users could click on “#BB14,” “bbtwist,” and the like: 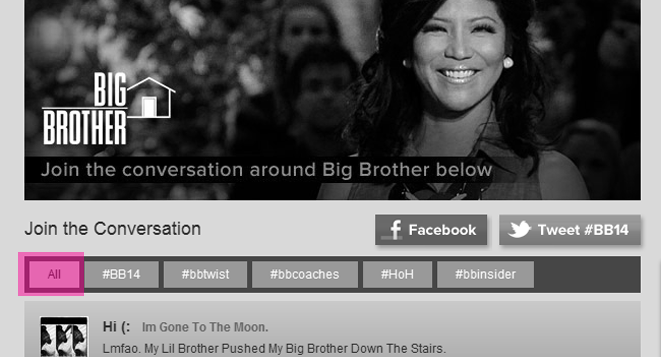 How the campaign could improve instantly

The show needs to move the “All” button as the last option on the bar above, and when the page opens, it should default to “#BB14.” These aggregated streams are simply done by searching Twitter for a designated term, then displaying all tweets with that term, so “#BB14,” the official hashtag of the show, which is featured on the screen during the series, is a much more clear term that will nearly guarantee that when someone opens Big Brother Connect, they will see big brother related content, rather than defaulting to tweets about dead or injured brothers.

Businesses that try to highlight overarching information are usually one of two things – ignorant, or taking an educated risk by trying to get as many tweets as possible featured so people will feel included, and possibly talk about how included they are, thus branding the aggregated stream and community. In your own aggregation efforts, remember the implications of the potential search terms you include.

I lost my little brother and only sibling to a car crash, and I can’t tell you how it pains me to open the Big Brother Connect page, get excited to see something about my favorite show, and have that “oh” moment when I see a tweet about a dead brother. That can’t possibly be what CBS was going for.