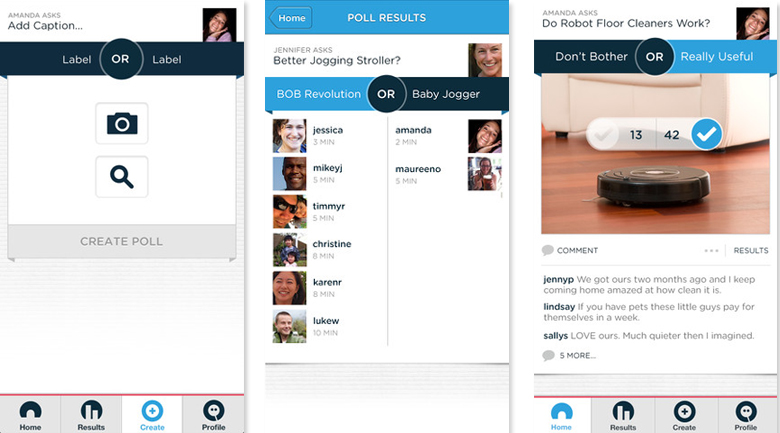 The rise of photo polling apps

The concept of photo polling has inspired a variety of mobile apps to make it even easier. Photo polling is just as it sounds – you can send your contacts several pictures and have them vote on their favorites. These apps are geared toward the average consumer, as the examples of photo polls include questions like: “Which hat should I wear tomorrow?” The truth is, however, that these photo polling apps can actually be put to good use for your business and/or social media growth. Here are three photo polling apps for the iPhone and why they might be the next apps you download.

Photopoll – This app allows you to include between two and five photos for each poll you create. Once you create your photo poll, other users can cast their votes. They can also submit comments on their choices, and you have access to every bit of feedback. You’ll be notified every time someone votes on your poll. If you want to add a little flair to your photo poll, you can even apply a variety of filters.

Voto – Voto is geared toward getting feedback from your friends and contacts. This app connects with Facebook so it’s easy access for all your contacts. You can also customize how often you’re notified of new feedback. You can then organize your polls into filtered categories, which makes it easy to find later on.

Polar – This app is very similar to the two above. Polar allows you to send your photo polls through text messages, email, and even Twitter. You’ll also see the votes and your friends’ feedback as soon as it comes in, so you can make decisions based on those comments instantly.

Now let’s move on to three simple, professional uses of these photo polls.

Redesign – When you redesign a logo, product label, or even your website, you could get feedback from your contacts and also from the public. Take or upload a few photos and have the voters choose the one that appeals to them the most. This could save you money by replacing your current survey program memberships.

Contests – Hold a contest with your customers or clients and then share the two winning entries and have the public vote who should win the top spot. The contest could deal with anything that would ultimately promote the interest in your brand.

Decisions – You aren’t sure which printer is better for your particular needs, or you would like feedback on marketing methods, so use the polling apps to get quick feedback to help you make decisions – it’s similar to asking on Facebook, only done so creatively.

The one thing these three photo polling apps have in common is that they’re free. Photo polling gets your clientele and customers directly involved with your company. When your customers feel they are an important part or your brand, what you’ll get is loyalty.